This is a little embarrassing but last year, the first year of my blog, I did not see a single foreign language film at the cinema. I promise that my viewing habits are not normally so exclusively Anglo-American.

This French film is the main one that got away. Following its big win at Cannes (the first time the Palme D’or has been jointly awarded to the director and the principal actors) and a series of excellent reviews I had been keen to catch it but it didn’t happen. Now that it has been released on disc I have remedied this and can say that it is indeed a very impressive piece of work.

The plot is fairly straight forward, telling the story of a teenage girl growing toward adulthood, discovering her sexuality and falling in love with another woman, but it is the performances and the direction that lift it above other coming of age dramas. Hang on, rewind, what was that plot again? Eyebrows are raised, that sounds a little bit risqué. A teenage lesbian? It is that sort of film is it?

Well frankly, yes to some extent it is. Let’s deal with l’éléphant dans la chambre first. In places this film is very very sexually explicit. If someone wanted to go as far as describing it as pornographic then I don’t think I could argue. I had heard about this aspect beforehand, much was made in the press about a fifteen minute sex scene, but I was still quite surprised by how graphic it actually is. (Incidentally, there is no fifteen minute sex scene. There are two main moments of sapphic love and they are both under five minutes.)

The fact is that the sex scenes are not easy to watch. They aren’t shot with beautiful atmospheric lighting and accompanying mood music; they are raw and exposed and as a viewer you get a real sense that you are committing some unimaginable invasion of privacy. Clearly one of the girls is a teenager too which only contributes to the discomfort. Adèle Exarchopoulos, the younger actress, was actually nineteen when the film was shot so there is no escape by telling yourself that in reality she was much older.

What the sex scenes do though, is add to the intimacy of the portrait of the central character. It is hard to say whether they are needed but it would certainly be a less powerful and less involving film without them.

What we have with Blue is the Warmest Colour is an honest and moving depiction of young people’s relationships and the angst and unreserved passion they involve. That isn’t to say that these emotions disappear with age but our reactions are undeniably different as adolescents and this film shows that. This isn’t the buttoned up romance of Jane Austen or the conventional cuteness of a hundred rom coms. It is the love of Romeo and Juliet and Wuthering Heights (without the melodramatic wailing and chest beating), none of it shackled by reason or circumstance.

The film also explores a number of other themes, including ideas of seniority versus youth, divisions in social class and academia in opposition to experience. Similarly there is strong imagery played out through the film, most obviously in the cerulean colour of Léa Seydoux’s hair, which changes as the women’s relationship progresses.

There is also a great scene (pictured) in which the emotions of the protagonist are mirrored by images playing out on a cinema screen she is standing by. The focus is pulled back and forth between her face and the actors in the movie behind her; making a clear comparison between real life and reel life, saying something about the art and artifice of human existence. Viewed in this context we see that the unflinching realism in every aspect of the relationship depicted is actually a deliberate aesthetic statement. Blue is the Warmest Colour becomes a three hour film version of Tracey Emin’s bed.

The performances of the two leads are both superb, especially Adèle Exarchopoulos who is now the youngest artist to ever win the main prize at Cannes. The film actually covers a period of eight to ten years and Exarchopoulos easily convinces across a range of ages from teenage to mid twenties without looking even slightly different beyond the tiniest change of hair and clothes. 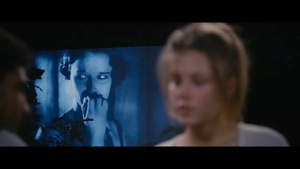 One thought on “Blue is the Warmest Colour”