When we came out of American Hustle one of my friends asked who it was that was playing the main guy. That would be Christian Bale, Haverfordwest’s favourite son, star of the Dark Knight trilogy, Academy Award winner and one of the greatest, most high profile British actors of his generation but it was a totally fair question. I think it is the beard, comb over and pot belly that causes the confusion. I am sure I’d have recognised him even if I’d not been reading about this film for months in various film magazines but at best my reaction would have been along the lines of “Blimey, is that Christian Bale? He’s let himself go!” Apparently Robert DeNiro didn’t recognise him on set either and he is someone who knows a little about changing your body for a part.

Yep, Batman is pretty out of shape, as the part of slovenly but stylish con artist Irving Rosenfeld demands. As always he is completely committing to the character in a way that few of his peers could match. It is a totally convincing and yes, transformative performance but even with all of that, he is not the stand out actor in this film. The guy can do grandstanding if he needs to (as The Fighter demonstrates) but that isn’t what this part requires.

The question of who actually does take the picture may divide opinion. The first obvious contender is Amy Adams as Bale’s lover and fellow con. Adams’ name comes up on award nomination lists year after year (4 Oscar noms so far as well as 4 BAFTA noms and 5 from The Golden Globes) and like Kate Winslet she will make it up into the podiums sooner or later. Once again she is superb giving a very open and exposed performance, both figuratively and, with the cut of dresses she wears, literally. (She must have used a fair amount of what I believe is politely called ‘fashion tape’). Her character, sometimes Edith and sometimes Audrey, is captivating. She manipulates the men around her but it isn’t always clear whether she is doing this consciously or not. There aren’t really any great histrionics but she is in turn composed, distraught, resolute and strong, a subtle femme fatale with uncertain motivations.

Less restrained and mysterious but no less real is Jennifer Lawrence as Rosenfeld’s wife. At first she comes across as beleaguered and emotionally abandoned but very quickly you come to realise she is actually frustratingly but endearingly bonkers. Lawrence, who impresses more and more with every film (and promotional interview) she does, does not have as much screen time as Amy Adams but it may well be her contribution to the film that proves the most memorable. You know what they say about the fury of a woman scorned? Well imagine how that looks if said woman also exhibits the emotional maturity and attention seeking behaviour of a five year old. You really don’t know what she is going to do next and at one point she even takes Paul McCartney and makes him cool again, which no one saw coming. Like large sections of the film Lawrence’s arc is tragic but fun and American Hustle’s best scenes are the ones with her in them.

The principal cast is rounded out by Bradley Cooper as the Fed on edge with Shakespearean levels of hubristic ambition and Jeremy Renner who is good but continues to look for a film that suits him as well The Hurt Locker did. Great as all the players are though, no one really eclipses anyone else and all of them, including supporting actors Louis C.K and Alessandro Nivoli as Cooper’s superiors, work brilliantly to make this an affective ensemble piece.

All this talk of the cast over plot is entirely appropriate as American Hustle is far more concerned with people than it is with story. Apparently lots of the film is improvised and when Bradley Cooper suggested to director David O’Russel that the way one scene was playing out was significantly changing the narrative, he was told not to worry about it, the characters were more important. This does show in the film for better and for worse. The characterisation is brilliant but the movie would have benefitted from a better story. It’s a good yarn but it is this component that means it is only a very good motion picture, rather than a great one. It certainly doesn’t have the pay off of something like The Sting. Okay, maybe that isn’t a fair measure, let’s use Maverick instead. It doesn’t even have the pay off of something like Maverick.

Having said that the film does keep you in suspense over exactly who is playing who and there are genuine levels of threat as the over zealous Fed starts gunning for the wrong people.

The script started out as a true story called American Bulls#*¥ but when O’Russell picked it up he rewrote it (and understandably retitled it) with no concern for historical accuracy. It is refreshing how up front the film is about this, starting with a card that reads ‘Some of this actually happened’. There are plenty of other films that stretch artistic licence to breaking point and still purport that their story is true. In reality there was a FBI operation, code name Abscam, in the late 70s. The bureau were assisted by a known confidence trickster, they did bring down a group of corrupt politicians and they did have someone posing as an Arabian businessman with a whole honeypot of money to invest. David O’Russell has kept all of this but has peppered the tale with made up people doing made up things.

This is the third film O’Russell has made in two years following The Fighter and Silver Linings Playbook. I think this is my least favourite of the three but don’t let that put you off because it is a high benchmark. If you enjoyed either of those two films or if you are a fan of the 70s, scam pics, Jennifer Lawrence or fashion tape then you should definitely catch American Hustle.

Bechdel Test Score = 3, the main scene between two women has them fighting over a man but there is another whole conversation about nail varnish. Don’t look to American Hustle for positive female role models, the women in the film are painted as self obsessed and manipulative but to be fair so are the men. It is to the credit of the film makers that we are able to sympathise with any of them.

American Hustle is rated 15 due to nudity, swearing, sexual references and neck lines that are close to waist lines. 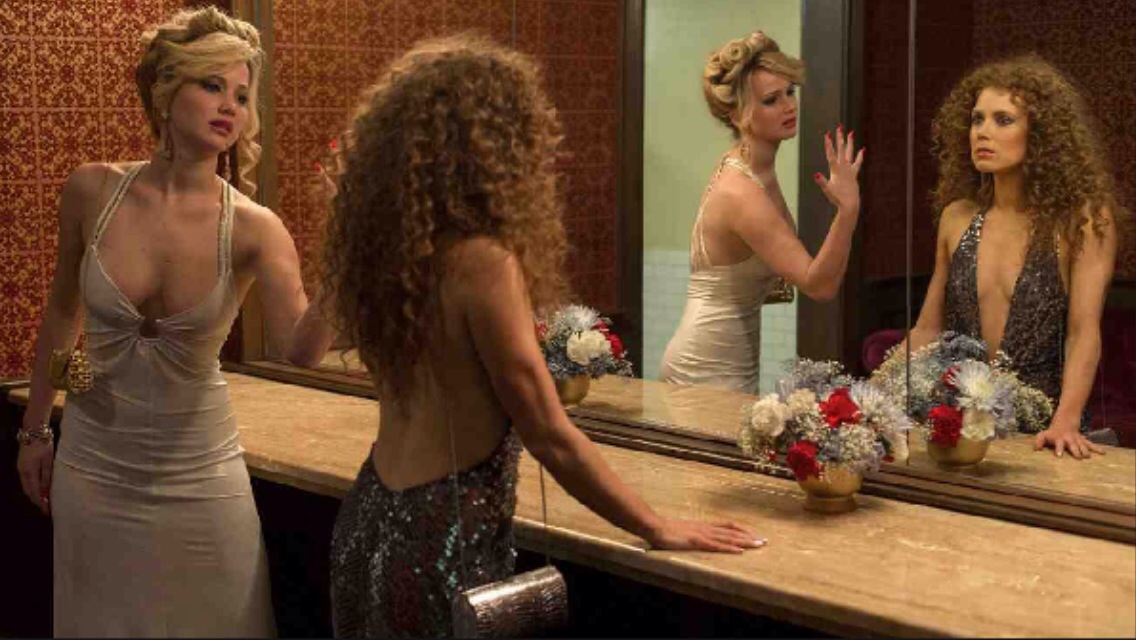