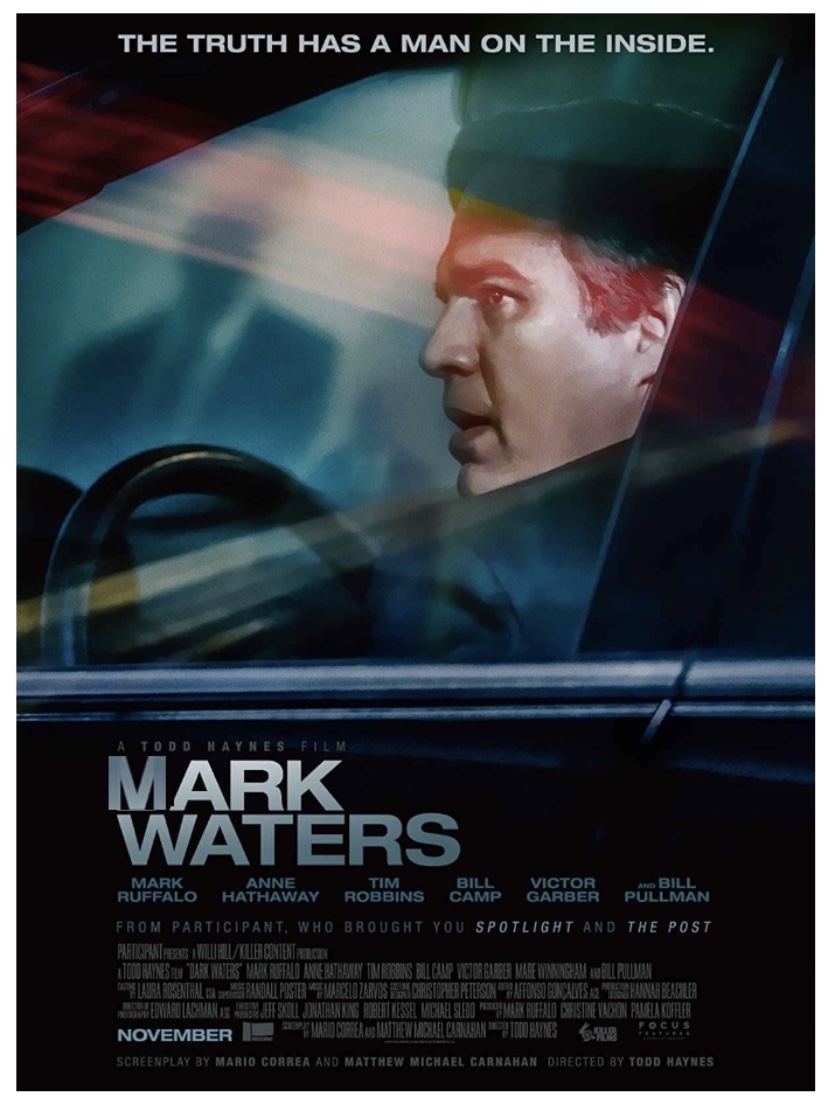 I’m not sure if it is some sort of unwritten rule but generally bloggers won’t ever mention their own name in their posts, especially those writing on a topic rather than their personal experiences. Mostly this is because there is rarely any real cause to do so but I’m sure it’s also about limiting how much of yourself you are putting out online.

On this occasion I am breaking the rule though because it isn’t often that a film shares your name but for its initial phoneme. That is what has happened here and with the release of Dark Waters I am pleased to be sharing this rare honour with my friends Roy Story, Jan Slabyrinth and John Withthewind.

Yep, ha ha, how witty but here the fun ends because Dark Waters, my cinematic near namesake, is a very tough and potentially upsetting film. I’m not sure if under this frivolous circumstance whether I’d have preferred it to be a fun action film but I’m guess I’m pleased it isn’t a load of rubbish. This isn’t Lark Waters though, or Spark Waters, it is most certainly Dark Waters.

The film tells the true story of Rob Bilott, a crusading lawyer who for the last twenty years has been fighting and exposing the dangers of the chemicals used in the manufacture of Teflon and taking on DuPont, the giant company behind it. At the start it all feels like another Erin Brockovich, early on it may even be too reminiscent of this to the point of cliche, but as it progresses and things escalate you realise the people presented as the bad guys here are not some local state based gas and electric company, they are the world’s largest chemical company with multi billion annual turnover and a huge reach. As a result nearly all of western society have their products in their houses and as it turns out nearly all of us have traces of the resultant pollution in our bodies. To quote Brockovich herself; it’s big… huge.

That is if it is all to be believed. With the scale of this it is not easy to accept but I think it is naive not to take it seriously. Apparently DuPont is considering suing the film company for defamation as we speak, they too think they are being presented as the bad guys, and the fact that there is some debate over the truth of it is probably why we don’t all know this story already. It is all very compelling though and there are certain facts that cannot be refuted. Watching it you feel that the name Teflon should be synonymous with corporate greed and public endangerment and yet it isn’t. Mind you, what the word can denote is someone or something that is miraculously undamaged by scandal which does seem very fitting.

This is a story that effectively tells itself and there appear to be few concessions to drama. At first this makes it all seem very procedural but as the impact of the scandal steps up and you see those involved succumb to illness, or in Bilott’s case righteous obsession, then it begins to be a narrative that is consciously being told rather than just being allowed to play out. Rather than taking anything from the film it only adds to the viewing experience.

Mark Ruffalo takes the lead, picking up a similar part to the one he played in Spotlight but bringing a different kind of humanity. At no point does he get angry, and he has certainly been angry in other movies (always angry apparently). Here he is more reserved and while he goes through other emotions, it is an interesting portrayal of someone striving for justice and avenging those who have been treated abominably. Tim Robbins also supports wonderfully with a character who doesn’t always react as you might expect. It isn’t him who has crawled through the contaminated water this time but he is still coming out clean on the other side.

Interestingly Anne Hathaway appears as Sarah Bilott and when she turns up with hair like Shirley Bassey, milling around the kitchen and having babies there is some surprise that an A-list actor like her has taken this type of supporting role. What becomes evident though is that she is subtly redefining the spouse role, actually culminating in her telling someone not to treat her like ‘the wife’ toward the end. She effectively shows that the supportive partner, moaning about what his work is doing to their marriage but standing by him when it counts is actually an important part of tales like this and we are wrong to write them off as lesser. The movie is directed by Todd Haynes who loves filming in rooms and this elevates the domestic scenes too.

This is an important film that tells an essential story, it is tightly written, well performed and demonstrates discipline and power in all the places it needs to. I’m proud to almost have my name on it.