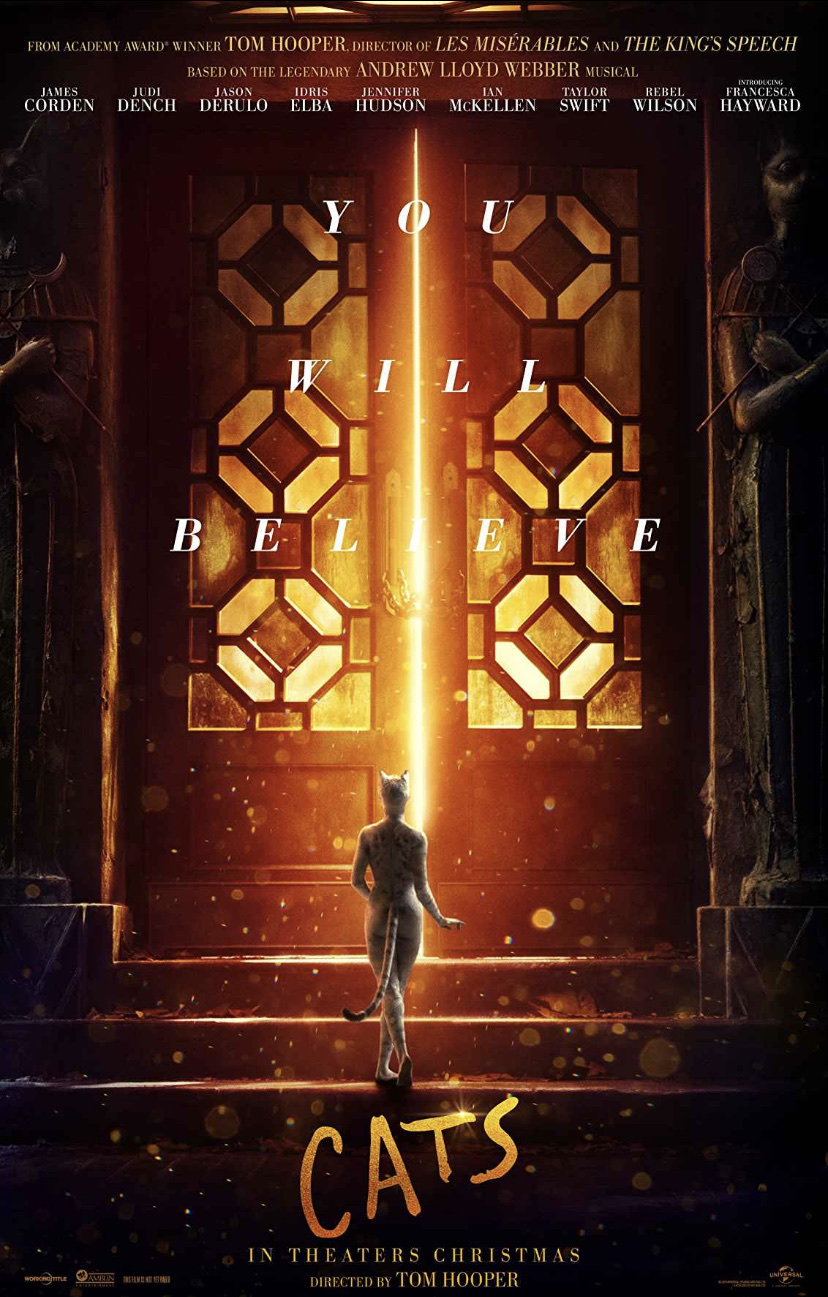 Yep, I saw Cats. What can I say, I was curious, even knowing what that did to this film’s eponymous creatures.

Sure enough, I should have heeded the idiom because I have to say that this was not the easiest trip to the cinema I have had this year. Nope, right at the start the staff member taking my drinks order couldn’t get his card reader to work and then when he returned he spilt our coffees. Then the film started though and everything from that point on was absolutely fine.

Yep, I enjoyed Cats. I have to say that the critical panning this movie has got is ridiculous. I mean the film is weird for sure, but I think a lot of the reviewers had a fun time tripping over each other to author the wittiest catcalls. Tim Roby in The Telegraph has got his paper some nice attention with his zero star write up but to say that Cats has no redeeming features is perverse.

There is no doubt that if you’ve not seen the stage show then you will wonder what the hell you are watching but for people who know the set up then this is exactly what you’d expect. Certainly the decision to adapt this for the screen was an odd one as it really does work better live but it’s a film version of Cats and as surprising and ill considered as that promise may be it delivers on it with skill and style.

So yes it has the plotting of a CBeebies show but T. S. Eliot’s poetry still shines through. It may feel like Disney have done another pointless live action version of something that was far better suited to animation but the design and sets are extravagant. (Incidentally this wouldn’t have totally worked as a cartoon either.) I’m not going to deny that there is quite a lot of stunt casting here but it is also a wonderful showcase for some of the best performers currently working in musicals and ballet.

In fact this is where Cats truly gets the cream because the dancing is amazing. I could watch Francesca Hayward glide and pirouette around the screen all day and she’s not the only one. Tony winner Robbie Fairchild is captivating as ostensible narrator Munkustrap and Royal Ballet principal Steven McRae is superb in the Skimbleshanks sequence. The staging of the songs are often fun too, particularly Mungojerrie and Rumpleteaser’s. In terms of the bigger names, not everyone lands on their feet but who doesn’t want to hear Jennifer Hudson sing Memory?

I can’t wrap up without commenting on the CGI costumes. Sure enough, just as in the trailer that the internet famously leapt on like it was catnip, it looks a little like Doctor Moreau has spent a busy week in the Battersea animal shelter. Idris Elba in particular should have kept his coat on all the way through. Again though, it’s just a more sophisticated version of how the cast have always been dressed. The faces do not look feline enough with there being no attempt to give anyone a muzzle or any other animalistic features but they didn’t want them all looking like the Grinch either so this might even be for the best. The ears are great though, I couldn’t take my eyes off the ears. Those ears showcase what computer animation can do better than the whole of John Favreau’s Lion King.

It’s simple then. If you like Cats then you’ll like this film and if you don’t then move on. There’s no need to sharpen your claws on this scratching post. It’s not offensive, it doesn’t objectify anyone (I know some reviewers have found it sexual but that says more about them than it does the film), and its a fun thing to take your kids to if they’ve already seen Frozen II and Jumanji. There are plenty of worse films.