This time last year director Rian Johnson was the focus of a lot of online conversation. Off the back of some well written genre films, one with a smart sci-fi angle, he had just done Star Wars Episode VIII: The Last Jedi and while it had made a nice amount of money, lots of people didn’t like it. Some thought he had taken this precious and unimaginably successful series of stories and ruined it with his own skewed sensibilities. Not me, I love The Last Jedi, but a lot of fans got quite upset. The response wasn’t always reasoned and polite either, of course it wasn’t; anger and the Web do not mix well.

Interestingly Rian Johnson has chosen to follow this with something that is certainly a much smaller project but is also his version of another unimaginably successful and passionately loved series of stories. Knives out follows the model of a classic whodunnit and as such is definitely walking in the shiny shoes of Agatha Christie. Once again attracted to the idea of playing with genre conventions, Johnson has made a movie that features a large country house, embattled relatives, a family fortune, a maid, a murder and an eccentric detective. Also, following on from all of the classic Christie film adaptations, it also has a large and starry cast.

Casual admirers of this sort of thing will have a great time with Knives Out. (We’ll come to the more ardent enthusiasts later.) The performances are all great, although this being a large ensemble a lot of the big names don’t have a huge amount to do. Jamie Lee Curtis might be one of the most underused but still nicely plays the uptight, proud matriarch living under the shadow of her father. Toni Collete is memorable as a status and image conscious lifestyle guru, LaKeith Stanfield nicely essays the beleaguered policeman with regular Johnson collaborator Noah Segan playing off him well and Jaeden Martell appears as a young and thoughtless internet troll which is no doubt a subtle response to the unsubtle response to the directors last film. Chris Evans is also in the mix, having a lot of fun as the arrogant son and moving away from his all American hero image and mention has to go to Christopher Plumber who is so much more than the victim. Eclipsing all of these people though is Daniel Craig as idiosyncratic professional sleuth Benoit Blanc. Like Evans he is really playing against the other part he is famous for and boy does he commit to it. By my mind though the real star of the film is Ana de Armas.

Most of de Armas high profile work has focused on her beauty, certainly this is true of Knock Knock and Blade Runner 2049 and the same looks to be the case when she reunites with Craig next April in No Time to Kill. Here though she is playing a normal person, the nursemaid to Plumber, and while she is undeniably still an attractive young woman here she is, make up free, fully clothed and showing she is so much more than a pretty face. Her Marta is the everywoman that allows us to access the complex plot and this outlandish family and it is the connection to her that stops the affectations of everyone else pushing the audience out of the narrative.

Around the performances there is also some incredible set design; the house itself is amazingly dressed, and there is a nice note of allegory that runs through the whole thing. Johnson doesn’t just set this in modern times, he ties it to attitudes in contemporary America and this is his spin on tropes.

What then of the story? Well, it is definitely clever and intricately put together. Here’s the thing though; anyone that aims to take on Agatha Christie at her own game is simply not going to win. Johnson has made a really good effort but he just can’t compare to the master. The best whodunnits, and pretty much all of Christie’s work, have that wow moment. I’m talking about the point at which the truth is revealed and you think ‘jeez, that was smart, I didn’t see that coming but it totally works and it is quite brilliant’. Other films have achieved this; The Usual Suspects, The Last Seduction, Chinatown, The Prestige, Oldboy, but Knives Out doesn’t. I’m not going to pretend I guessed the ending but there was nothing surprising about it when it came. It even tries a similar trick to Christie’s own The ABC Murders, where it seems to tell you what happened mid way through only to add layers to it later but while it doesn’t drop the ball neither does it hit it out of the park. Anyone who is particularly au fait with crime fiction is likely to find this a little disappointing.

The reviews for Knives Out are strong, which is fair, and I’m pleased Rian Johnson is getting the plaudits he should have got from everyone twelve months ago. He’s put his spin on a familiar idea again though and once again he will have fallen a bit short of what some fans might have hoped for.

Having just watched the film again, I liked it more. If you loved it, great. If you had reservations, give it a second viewing. 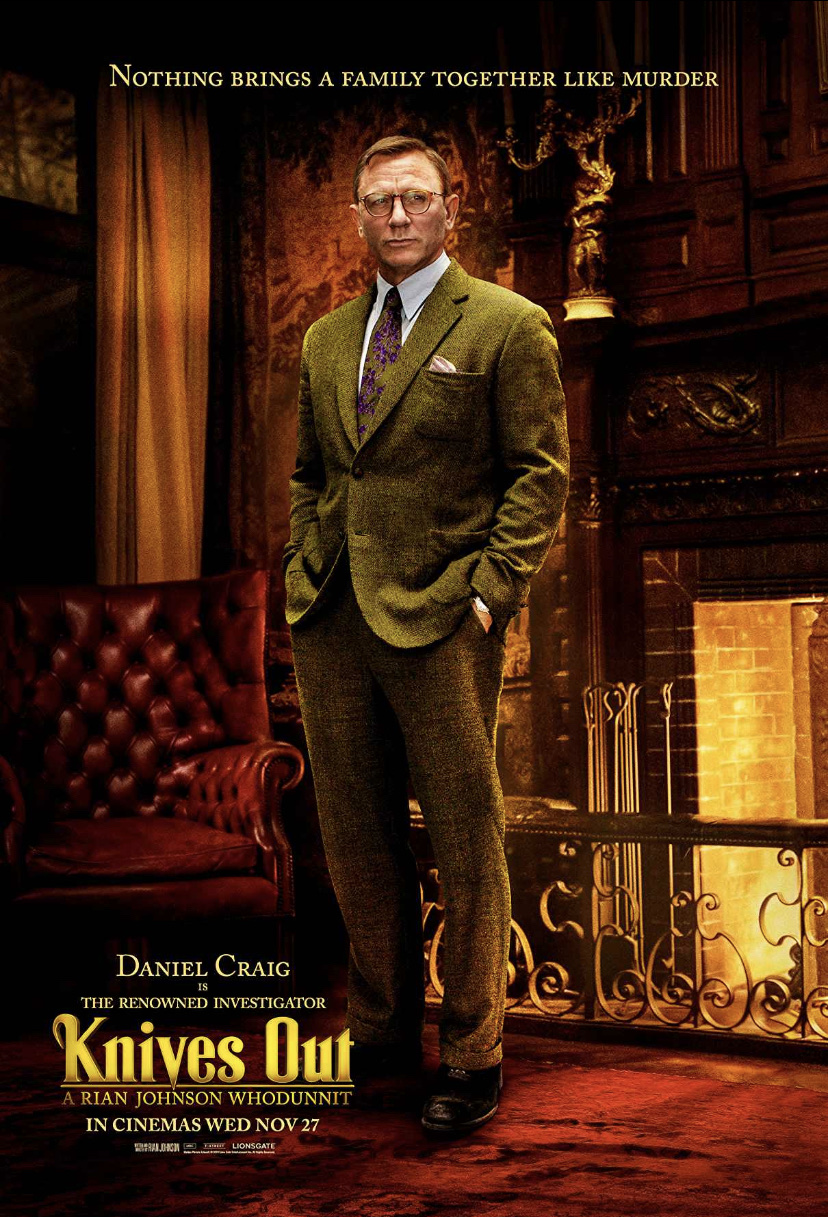 One thought on “Knives Out”