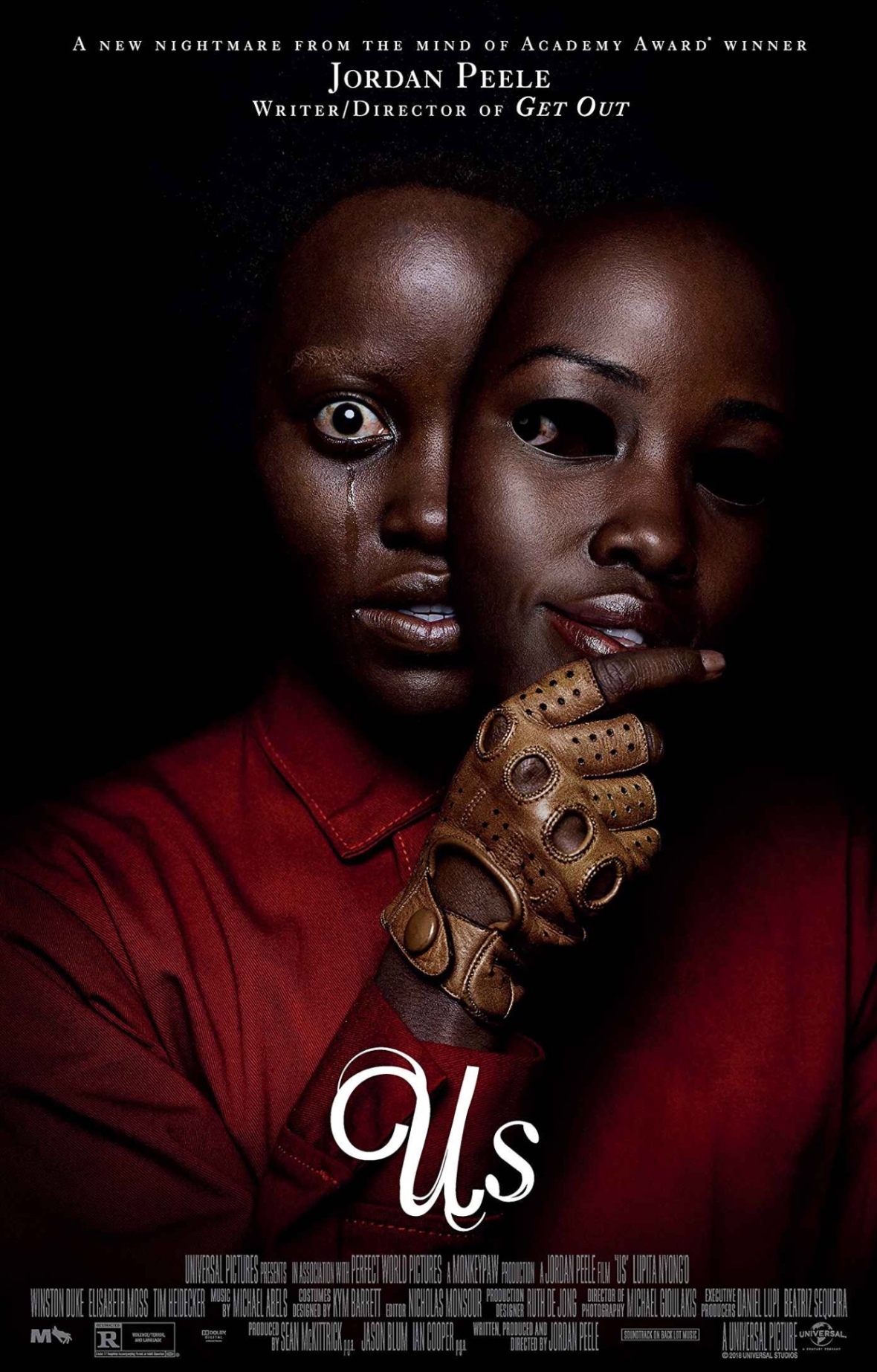 On the surface of it Jordan Peele’s follow up to his widely celebrated debut film Get Out is another superb horror film. It is intricately conceived, beautifully shot, tense, atmospheric, astonishingly performed, witty and captivating. This alone is enough to recommend it but actually there is so so much more. Us isn’t just a really smart genre movie, set to become a favourite with a certain section of the audience, it is an insightful fable that stands to raise hard questions about modern life and humanity in the early part of the third millennium. If you’ve seen Get Out this won’t come as a huge surprise as that was a smart satire on race relations under Obama, but Us is better, bolder, scarier and more ambitious.

The title initially seems to a refer to a family being terrorised by four twisted doppelgängers but there is a double meaning to it. It isn’t just a simple collective pronoun, it also reads as US and while the film centres on a mum, a dad and two kids defending themselves from spookily familiar house invaders, it is really about America turning on itself.

This film is about the dangers of what dwells below the surface of the presentable face of society and how people can become what they fear. It is about a religious country being deserted by its god as its actions and flawed initiatives come back to haunt it. It is about a culture that hides sinister intentions behind outwardly charitable action. It is about the failure of patriarchy and it is about the limits of any society built on prejudice and inequality. Of course with all of this the film could almost as easily be about Britain, or any number of other nations, but this is evidently a very specific critique of contemporary USA.

If you’ve not seen Us then I urge you to do so. It is a superb film that will have you frantically thinking about what you are seeing and what you have just seen and I doubt you’ll watch a more intellectually engaging movie all year. You’ll need to be able to stomach a bit of bloody violence but even if thats an issue the long term rewards are well worth some short term discomfort.

Then once you’ve seen it I invite you to come back because from here on I am going explore these highlighted themes a little more.

Still here? Great. How good is this movie? Let’s pick it apart a little.

I don’t want my interpretation of this film to read as a personal attack on the States, again I iterate that we in the UK are in no position to throw stones but Jordan Peele is an American film maker and he is turning a mirror on his own country. This certainly makes the film sit alongside Get Out which demonstrably did the same thing.

It is key that when the family are under attack, their plan of escape it to head to Mexico. They are in California and could just as easily head North or East but they seem to recognise the threat as being particular to the country they are in. Also the tag in on the US posters for this movie is ‘Watch Yourself’ which is a slogan that appears to be largely absent from the European publicity. Also, there’s the small detail that when the invaders are asked who they are they reply: ‘We are Americans’.

Three of the American posters and four international ones

The Threat Under the Surface

It is no coincidence that the attackers come from below suggesting that the threat to society is right there below the surface and has been for years. This hidden subculture even imitates the one people see but it isn’t as presentable, like the ugly attitudes that people keep hidden but still threaten our way of life.

A Problem of our Own Making

I had an interpretation of most of the film while watching it but it took me a while to work out the bunnies (other than the fact that the mother has literally gone down the rabbit hole at the end).* They appeared to be lab rats and in the end the fact that they lived among the distorted versions of us is the first indication that these humans were also the result of some kind of experimentation. This works with the rest of the analogy in the sense that it is people that created these problems. We are our own worst enemies.

Are they genuinely us?

The film makes it clear that the only difference between the normal people and the copies is circumstance. Each of the family become killers and pretty coldly too as shown when they are in competition against one other for their number of kills. The son is alarmed and scared to see what his mother becomes and of course in the final twist we really see how interchangeable we are with them.

Where is your god now?

Jeremiah 11:11, the Bible verse that features in the film, reads ‘Therefore this is what the Lord says: ‘I will bring on them a disaster they cannot escape. Although they cry out to me, I will not listen to them.’

America is still publicly a Christian country but with the inclusion of this biblical quote Peele seems to be saying that this religion will not offer any salvation. People can pray but it won’t be heard. In fact maybe the belief system is at least partially responsible for the retribution suffered.

The whole hands across the world thing confounded me a little too. Clearly young Adelaide will have remembered the charitable campaign from her childhood and as she became one of the others after her kidnap her child mind interpreted it literally as a way to spread their ideals across the planet. This could be a comment on the corruption of charitable organisations but I’m still working this one through in my mind.

There is definitely a feminist reading to be made of this film. It has a female lead (two female leads, both played remarkably by Lupita Nyong’o) and she is strong and commanding (they both are). There is also comment made on the failure of traditional male roles when Adelaide clearly pronounces to her husband that he is not making the decisions anymore and from here on she is the alpha parent. She takes control and finally moves everyone to some resolution. This can easily be seen as a metaphor for wider female empowerment within a patriarchal society. It is significant that there is failure in her actions too though and ultimately the film seems to be saying that only inequality can work moving forward. Both man and woman have their own victories and loses and they can only succeed through collaboration.

These are my initial reactions to Us and I am sure that with thought some of my ideas will change. The one thing I will stay sure on though is that this is an brilliant film and Jordan Peele is an exceptional film maker and that is properly exciting.

*I have since listened to an interview with Jordan Peele and apparently the rabbits signify Easter and rebirth. Of course they do, I see it now. If he’d used eggs those of us in the UK would probably have picked up on that better.