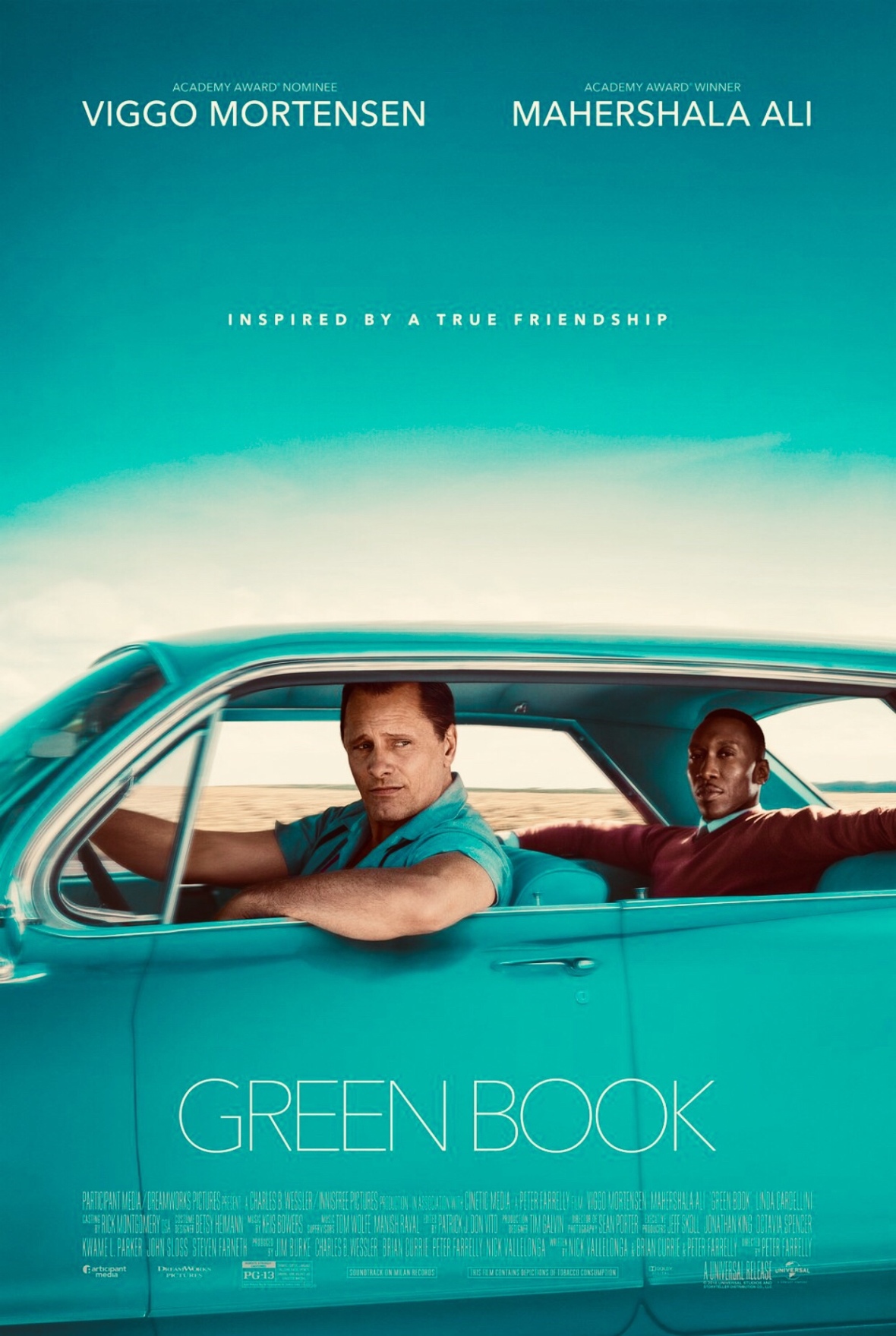 1. of the colour green

3. deficient in knowledge, or experience

4. denoting a light or flag used as a signal to proceed

Yep, by a number of the word’s various definitions Green Book is pretty green. This might seem appropriate but looking at the above it’s not a good thing. First off some shots in the movie are viridescent, as is the poster. No problem there. Unfortunately the film also appears to lack the qualifications it needs to tell the story it should be telling and certainly feels deficient in knowledge and experience. Also as a result of those three little golden statuettes it won a week ago, it may regrettably prompt the approval of similar projects. Of course green also means ‘not harmful to the environment’ but I fear the success of this film could damage the new Hollywood landscape.

I felt for Barry Jenkins and the team behind Moonlight when that won the Best Picture Oscar a couple of years ago. I was worried that their wonderful victory might be overshadowed by the whole episode where La La Land was mistakenly announced as the winner first. Similarly I do feel a bit for the producers of Green Book now. At least the morning after Moonlight took the top prize no one was discussing whether it deserved it or whether its selection as the film of the year was indicative of a latent prejudice people hoped had disappeared.

To be fair to the writers Nick Vallelonga, Brian Currie and writer/director Peter Farrelly, the film aims to condemn this very prejudice. This is commendable but they have inadvertently, and probably quite naively, added to the problem.

Clearly there have been plenty of films to receive the top award at the Oscars that really shouldn’t have; Chicago, Titanic, Crash, Forest Gump, but this one is about more than poor critical judgement and it was immediately an issue. Watching the show last Sunday I had thought that what I heard following Julia Roberts’ announcement of what was on that last red card was a surprisingly big cheer but the following morning was widely reported as having been a jeer. There are shots of Chadwick Boseman with a very disdainful look on his face as people walked up to collect the award and Spike Lee apparently got up and walked out. Of course Boseman and Lee both had films up against Green Book but this is bigger than personal disappointment.

Since the #OscarsSoWhite movement started in 2015 there does seem to be greater diversity in both the film industry and its awards shows. The fact that Boseman’s Black Panther and Lee’s BlacKkKlansman were real contenders in this competition should be celebrated and the parade of famous faces that came out to give out the statuettes on that night were noticeably not all white. Unfortunately the final crowning of Green Book has kind of undermined this. It wouldn’t have been a problem if Roma had won, partly because that represents a minority group too but also because it was amazing. It would have been okay if The Favourite had been the favourite too because it is a genuinely innovative piece of film making. The reported problem with Green Book is that it did tackle race issues but it did it from a distinctly caucasian point of view. Certainly while there had been many black people on stage at The Dolby Theatre in LA during the evening, the same wasn’t true during that acceptance speech. 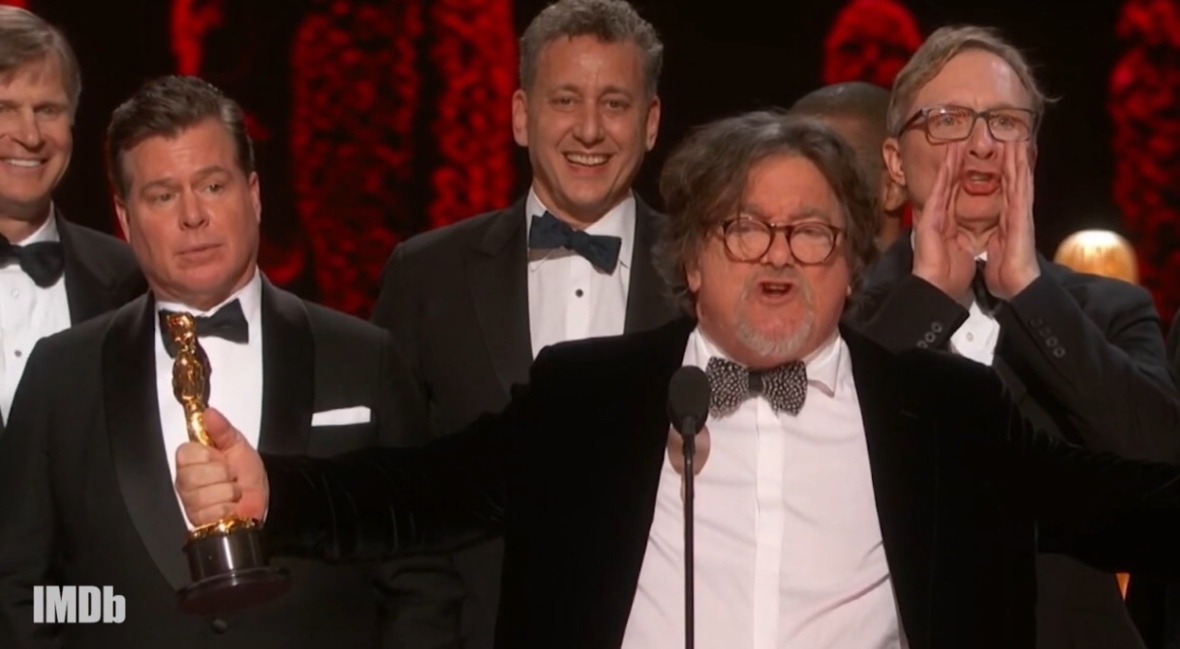 Again, the fault isn’t necessarily with the Green Book gang although they could have definitely done more to encourage diversity in their team. The fault here is with the Academy voters who chose a film that told a black story but didn’t choose a film where that story was told by the people who could authentically tell it. I mean could you even for a minute imagine what Black Panther or BlacKkKlansman would have been like if they’d been made by predominantly white people? You and I shudder to think but Hollywood has just told the world they’d have probably preferred that.

As a brief sidebar it should be mentioned that whatever faltering progress Oscar has made with cultural and ethnic diversity this year it’s not been matched when it comes to the representation of women. There was a lovely fuss over Greta Gerwig being nominated for Best Director last year but this all seems to have been forgotten now with no women being up for the award twelve months later. #TimesNotUpYetAfterAll. Evidently the US film industry can only concentrate on being diverse about one thing at a time.

I only saw Green Book this week after all of this stuff had blown up. A few people have jumped to its defence over the last few days but there is absolutely no denying that this is a very unadventurous, unsurprising movie. I couldn’t tell you how much I’d have noticed it initially but once someone has pointed out how much it perpetuates the white saviour trope then there is no seeing anything else. The film tells the true story of the apparent developing friendship between accomplished black musician Don Shirley and the Italian guy who drove him around the Southern US States on a 1963 concert tour. In the end though it is mostly about the wheel man; Tony Vallelonga (writer Nick Vallelonga’s father). At its heart Green Book is a racist man’s redemption story. It depicts racial prejudice but only in the most cliched way and, while it goes both ways, too often the black character is in debt to the white one.

Green Book is incomparable to BlacKkKlansman in every respect but especially in the power of its narrative. Spike Lee’s film dances around its audience, occasionally telling them not to forget the importance of its message, politely saying thank you and goodnight at the end and then suddenly slapping everyone hard in the face and screaming at us to wake up. Black Panther comes to the party ready to play a game that its previously been excluded from only to win with immense fairness, dignity and pride. These are only two of the recent films that come from black film makers as well. Outside of the main Oscar race we’ve also had Barry Jenkins’ follow up If Beale Street Could Talk which really should have been a bigger part of the awards discussion. Adapted from James Baldwin’s novel this was a heart rending tale of the polar opposites of love and hate and the incredible power of both. Then there was The Hate U Give, a brilliantly balanced contemporary YA movie about an African American girl who sees her childhood friend gunned down by police and has to deal with the fallout. This one was one of the most human and passionate stories I’ve seen for a long time and made me well up more often than any film I’ve ever seen. Green Book on the other hand plays out with a confidence it hasn’t earned, does similar tricks to films from thirty plus years ago like Driving Miss Daisy, Glory and A Time to Kill and takes a bow oblivious to whether anyone is clapping or not. Sure it can juggle some balls but the circus has moved on. These stories don’t need to be told without authenticity, not then but certainly not now, and they don’t need to be held up as the pinnacle of cinema when they are.

Nope, green is not the colour that this film should have been.