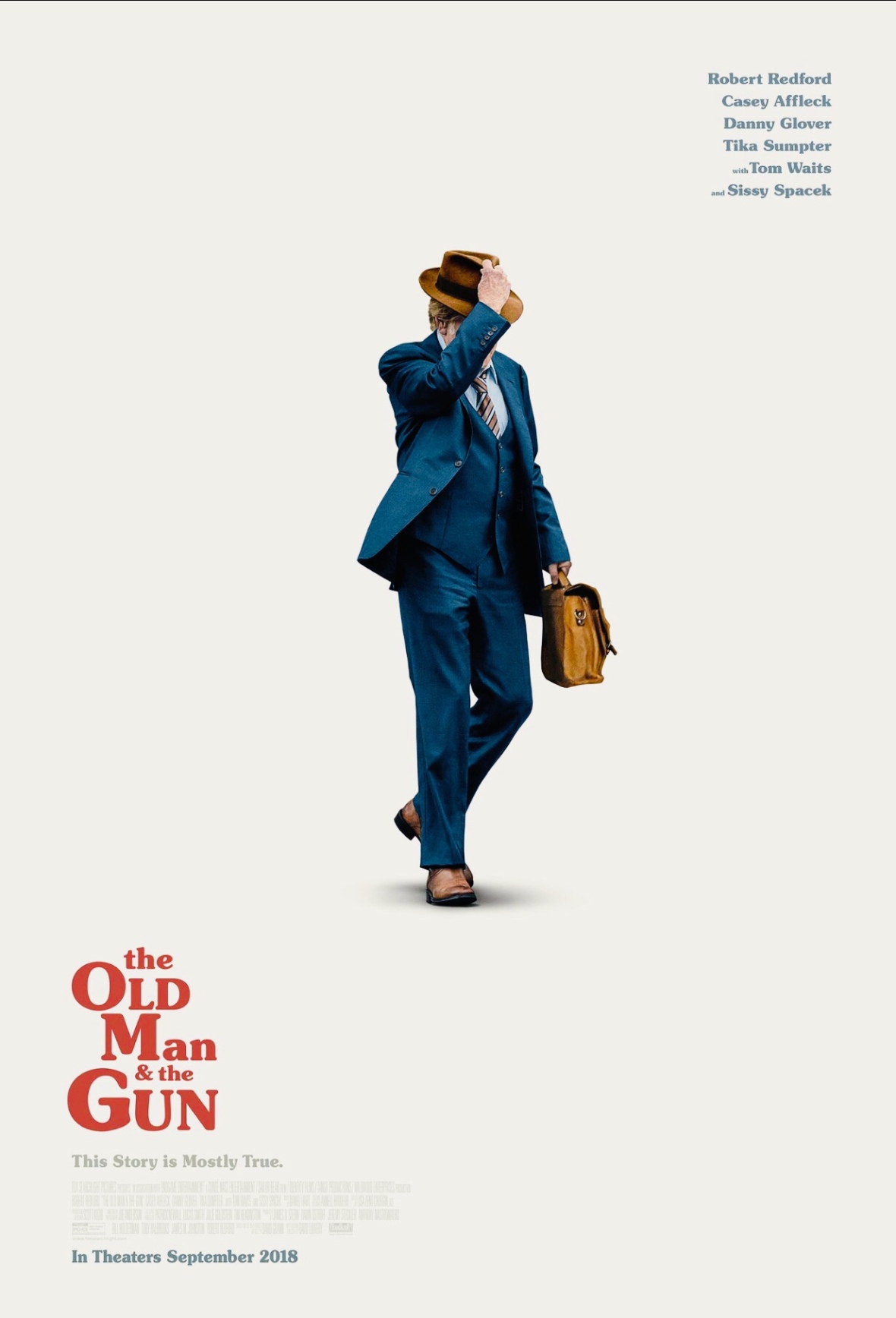 The Old Man & the Gun has been announced at Robert Redford’s last film. Redford is retiring, Bob Woodward is bowing out, Waldo Pepper is winding down, Gatsby is giving it up, Out of Africa is out of here. Sundance is heading off into the sunset. If she sticks with this, and like Connery and Hackman I suspect that he will, then this is a perfect final movie for him.

Redford, who effectively started his career holding up trains in Butch Cassidy and the Sundance Kid, plays an ageing bank robber here. In that film he was part of the ‘hole in the wall’ gang, in this one he is in the ‘over the hill’ gang and the movie features several shots from his celebrated filmography as we see flashbacks to the characters’ younger life. It is as though the whole story was written just to wrap up and bookend his fifty eight year career.

It wasn’t though as this tale of a man who kept pulling heists well into his late seventies is actually true. The real Forest Tucker spent his life in and out of prison, breaking out a total of eighteen times. He stole from innumerable banks, sometimes up to sixty in a year and at least four while he was living in a retirement home, and he gathered a combined haul of more than four million dollars. He came to the public eye in 2003 when The New Yorker did a piece on him under the same title as this film and passed away in jail a year later at the age of eighty three. He was also known as being incredibly polite to his victims, just as portrayed here, used a gun but rarely pulled it and never shot it and saw no need for actual violence despite being gunned down by police a few times himself. You can see why Redford, who produces here as well as starring, may have been attracted to this project.

In the hands of director David Lowry this is a more gentle and charming film than you might think. Most of the excitement, with the exception of one jolly car chase, happens off screen and just like those who met the real Tucker, you never see a gun fired. The Old Man & the Gun is more of a character study than a regular crime caper but is no less engaging for it. It is quite refreshing to see the reaction rather than the action for a change and in Redford’s wrinkled but still steady hands said character is totally captivating.

Redford’s Tucker is not the only character either. His two gang members, Tom Waits and Danny Glover, are really nicely played. With this and The Ballad of Buster Scruggs Waits seems to be getting less grizzled with age and Glover is endearing company even though he was getting too old for this s#!t thirty years ago. Playing directly opposite Redford is Sissy Spacek as the real life Tuckers’ third wife Jewel. Their relationship is only seen in its early stages here and is a sweet as any meet cute in any romcom.

The Old Man & the Gun is an unconventional but accessible film and I think I like Lowry more with this kind of balance. His last movie, Ghost Story didn’t work for me. It was supposed to be a searing picture of bereavement but I thought it was silly in its quirkily artistic approach. Pete’s Dragon went too far the other way though playing it safer than a pair of Goodyear tyres wearing two bulletproof vests, only eating organic veg and signing up for their Winter flu jab in July. In this film Lowry plays with filmic conventions and honours them in equal measure and it works.

Ultimately this is a delightful film about getting older and the importance of doing what you love. It is also good to see a film with an older cast where that’s not played as a novelty. My only gripe is some apparently heavy Budweiser product placement (seriously other beers are available and so are other pencil pots). Even with the great supporting cast and the confident direction this is Robert Redford’s film though and final movie or not, he’s as good as he’s ever been.

There could easily have been a version of this story that marginalised women but even though they only appear as girlfriend, wife, mother, daughter or bank teller each of the female performances are well written and rounded. All of the ladies have a strength and morality not really seen in the men and Spacek is the film’s heart. Tika Sumpter makes a big part of her role as mum and Mrs. Policeman and Elizabeth Moss puts in a memorable one scene appearance as a woman whose simple selflessness and focus brings justice when no one else seemed to be able to. The men are the antiheroes but the women are actually the heroes.