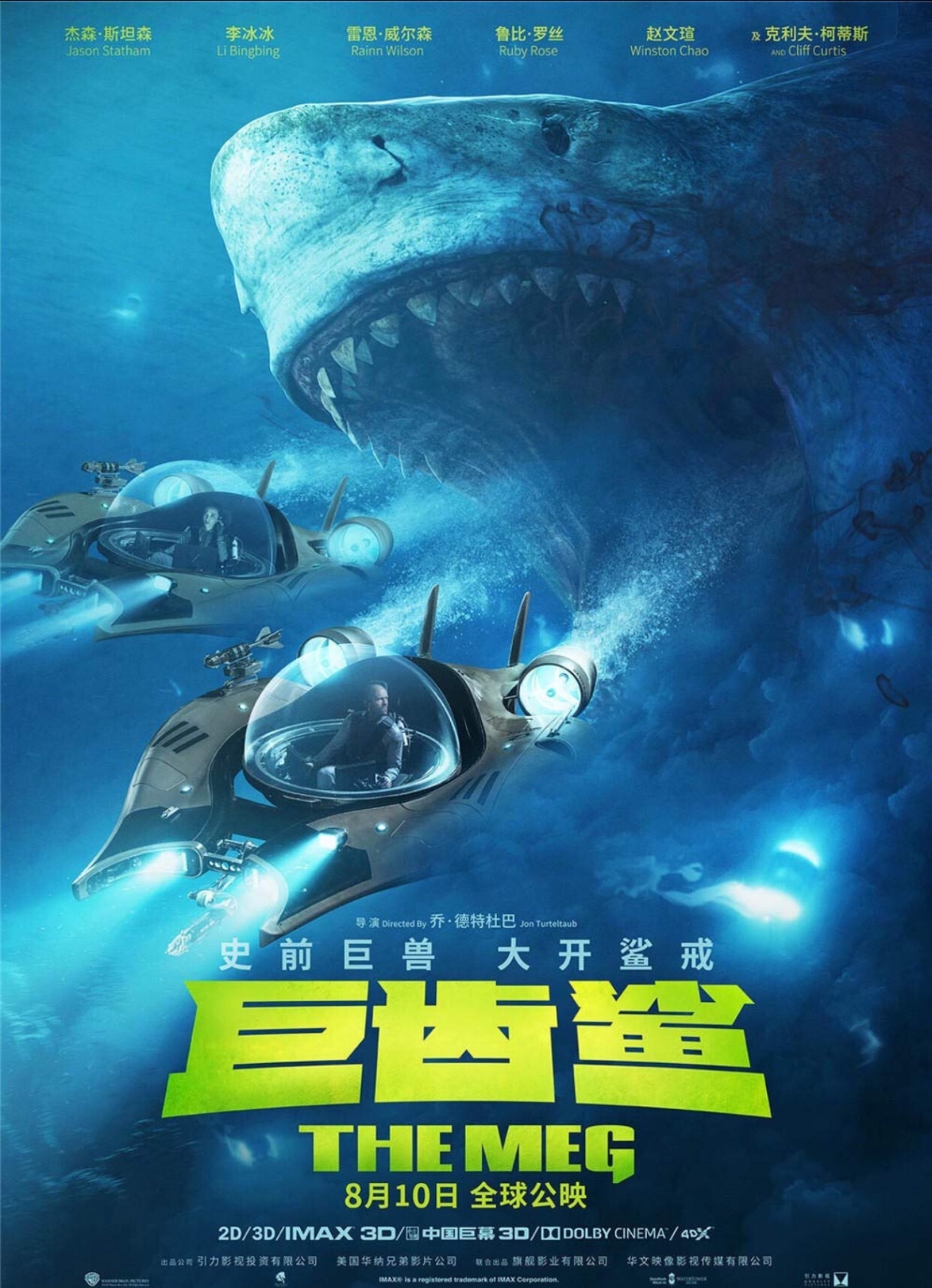 Having been critical of Mamma Mia! Here We Go Again last week I can’t in good conscience give The Meg a positive review, no matter how much in the mood for it I was. I couldn’t justify the ABBA movie’s flaws just because some of it was quite fun so this giant shark movie will similarly receive no such clemency.

It is true that I had a great evening going to see The Meg. I caught up with a friend I’ve not seen all Summer, we had a couple of beers, ate some chicken wings and watched an undemanding film. By any reasonable measure though this is not a good movie.

The plot, in case you don’t know and in case you care, has Jason Statham being called to an expensive research lab in the middle of the ocean because some scientific activity has released a massive finned, sharp toothed prehistoric monster from a secret eco system hidden beneath the Mariana Trench. He, you see, it the only man who has faced such a creature before and in terms of his diving, if not his acting, no one goes as deep.

You can pretty much imagine how a synopsis like that would play out and you’d be quite correct. There is not a single surprise in this film other than the fact that no one involved, with the exception of the special effects team, is doing anything other than treading water. Whilst trying to land the big shark they fail to land any of their lines and despite the fact that people do get chomped there is absolutely no sense of peril.

A large part of the problem is the performances. For some reason the acting is very lacklustre. There’s high drama playing out on screen but no one really seems very perturbed by any of it. At one point the leading lady, Li Bingbing, is in a plastic shark cage being attacked by the beast and when reassured from the boat that it won’t break she responds ‘no, but it’s being swallowed’ with no more emotion than if she’d just said ‘don’t wait for me, I’ll catch up. I’m just tying my shoe lace’. Good God lady, YOU ARE BEING SWALLOWED! Muster up some concern.

Statham is regularly inches away from losing body parts but always seems to follow this with a smile and there is a nine year old girl who is so cool under pressure that she makes Indiana Jones look like Bridget Jones. There is a little bit of frowning when characters die but this is totally and tonally uneven as well with some of them getting a wake and others getting a wise crack. Then there is an actor called Page Kennedy who is trying to be LL Cool J in Deep Blue Sea but can’t even reach that marker. Frankly, watching it I was in more distress than they were.

Speaking of Deep Blue Sea, the shark movie sub genre is a surprisingly crowded pond. Clearly the film that started it all remains leagues ahead of every movie that has swam after it but there are many other strong movies like this already. Aside from Deep Blue Sea, which is corny but enjoyable, there is the really effective Blake Lively stuck on a buoy flick The Shallows, Open Water and 47 Meters Down. There are also any number of trash exploitation flicks of which the Sharknado films are only the tip of the iceberg. The Meg doesn’t really bring anything new to the party.

When you throw it in with monster movies more broadly it really doesn’t compare at all. There are already a lot of bigger fish.

Size is actually a factor in the failing of this film; the beast is just too large to take in. There is a reason why the velociraptors are more scary than the T- Rex and movies like this are hard to do right. Just like Gareth Edwards’ Godzilla, Roland Emmerich’s Godzilla, anyone but Cooper & Schoedsack’s King Kong and anyone’s Pacific Rim films, less here would have definitely been more. The films of this type that work; films like Monsters, Troll Hunter, Colossal and Cloverfield, do so because they concentrate more on the people but the people in The Meg are simply not engaging enough. Also, how is it that a 75 foot shark is so easily and repeatedly able to sneak up on those people?

Jason Statham approaches everything with his usual tongue in cheek commitment but in the end it’s all just too stupid and for that I can’t let it off the hook.

There are a few severed arms here but the film is rated 12A and is about as scary as Finding Nemo (which randomly is actually referenced in The Meg).

The female lead is brave (either that or she has no perception of danger – it could be either), she is smart, she is instrumental to the plot and she isn’t objectified. What is most notable about her though is that she is a big star in China. American blockbuster films have had an eye on the ever more important Chinese market for some time but this is a proper joint venture with chunks of the dialogue in Mandarin. It has paid off too with the film making $400 million which is way more money than it deserves.

I will watch this seachange with interest as the American movie industry has too long been at the top of the food chain. My concern though is that lots of films including Deadpool, Mad Max: Fury Road, Ghostbusters and Christopher Robin have all being banned in the Republic of China for potentially offending the nation’s sensibilities. I’d hate Hollywood to lose its teeth.