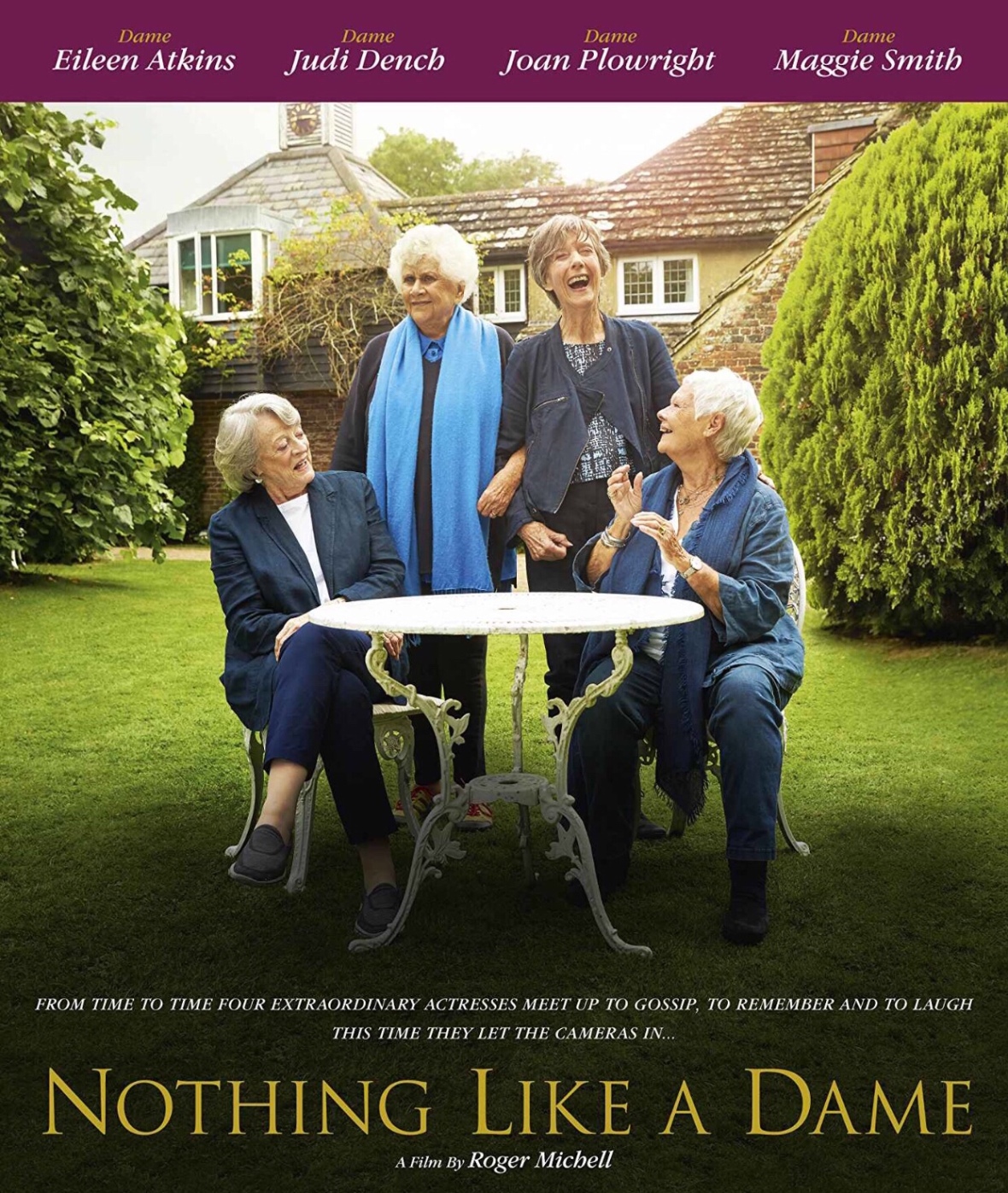 Nothing Like a Dame is a fairly straight forward documentary film from Roger Michell. It was shown in cinemas for one day early last month and now, having been broadcast on BBC2, it is available on iPlayer until the end of June.

Essentially, the film consists of four of the UK’s greatest living female actors, if not the UK’s four greatest living female actors, sitting and talking to one another about their lives, their careers, the people they all knew and their experiences on some of the most celebrated stages and film sets. The name of the doc is a little bit cheesy, being taken from a song from South Pacific/the 1977 Morcambe & Wise Christmas Special, but it is entirely fitting as there is no one quite like Dame Joan Plowright, Dame Maggie Smith, Dame Eileen Atkins and Dame Judi Dench. These four women have all indeed given great service to drama as their shared titles recognise; their contribution to theatre, TV and cinema is almost immeasurable and certainly unmatchable. They are also wonderful company.

These women are all friends, regularly meeting to chat, and the documentary posits at the start that all they have done is film one of these get togethers. This is clearly not the case as much of the conversation is engineered but the film doesn’t hide from this. It show the direction being given as well as the subject’s impatience/amusement at the artifice of the whole thing. This adds to the charm but the draw here is undoubtedly what these ladies have to say.

There are lots of lovely nuggets here, such as Judi Dench’s story about responding to being offered the part of Cleopatra by asking if they really wanted the iconic beauty to be played by a menopausal dwarf and hearing that Maggie Smith hasn’t seen a single episode of Downton Abbey and doesn’t really know how many series there are. There are also insights into their work though such as Dench revealing that ‘fear is the petrol’ making what they do possible. No one is being particularly unguarded and there are no great revelations but they are being candid, especially when talking about ageing. Judi Dench tells a story of being asked by a paramedic if she had a carer with particular vehemence. There are also honest but affectionate views into what it was like working with Laurence Olivier, mostly but not just from his widow.

In fact this last point raises one of the most important themes of this piece. The film is not called A Knight’s Tale or All-knighter, it is called Nothing Like a Dame. (Who would they get, Caine, Kingsley, Hopkins and Courtney? That would not be an ounce as endearing.) These stories are demonstrably women’s stories and in the seven decades since they started working there has been slow but real change for the fairer sex. It is clear that Plowright, Atkins, Smith and Dench have all lead the way, to one extent or another, in making women’s voices heard in the profession.

This is not an overtly feminist work but it does showcase examples of women, in many of these remembrances young women, standing up to men. No one here is reporting sex crimes like those that have been bursting out of Hollywood over the last nine months but Smith and Atkins were clearly bullied early in their careers and they evidently didn’t suffer it silently. They are obviously all fond, or at least genially forgiving, of Olivier and their accounts of his temperament are mocking rather than shocking. There were clearly worse people than him in their world. Even this isn’t dwelt on though and more gently revolutionary than the reports of domineering men are satisfying anecdotes of the pomp of lead actors being punctured. One example is Alan Bates coming to realise that Shakespeare wrote a much much better part for Cleopatra than he did for Anthony and hidden in the conversation are similar unassuming tales of small victories for womenkind.

Interestingly quite a lot is made of how all of these women were described at the start of their working lives as ‘not conventionally attractive’. Putting aside how unfair this was it does highlight how each of them can put their success down to talent rather than looks and this feels like something to be celebrated too. I’m not sure how many of the most important female performers that have emerged in the last ten years could say that their appearance has not been factor in their success. You’d struggle to get four in a room together for sure.

While the draw here is the talking then the film is much more than just a webcammed podcast. Director Michell has added in an incredible wealth of archive footage that supports the women’s recollections perfectly and highlights their skill more than their own modesty allows. This is where the surprises are, not least of all how much Eileen Atkins used to look like Andrea Riseborough, and it brilliantly brings their inspirational lives to life.

Dame Judi Dench, Dame Joan Plowright, Dame Eileen Atkins and Dame Maggie Smith, the stars of Skyfall, Shakespeare in Love, The Best Exotic Marigold Hotel, The Prime of Miss Jean Brodie, Room With a View, Harry Potter, Gosford Park, Nanny McPhee, Paddington 2, The Crown, Cranford, Ballet Shoes, Upstairs Downstairs, Downton Abbey, The Entertainer, Enchanted April and Tea with Mussolini, to name barely any, have earned our admiration and respect some time ago. Frankly, giving them seventy seven minutes of your time is the least you can do and you won’t regret it if you do. If you have any interest in film and performance then you’ll want to catch this one while you can.