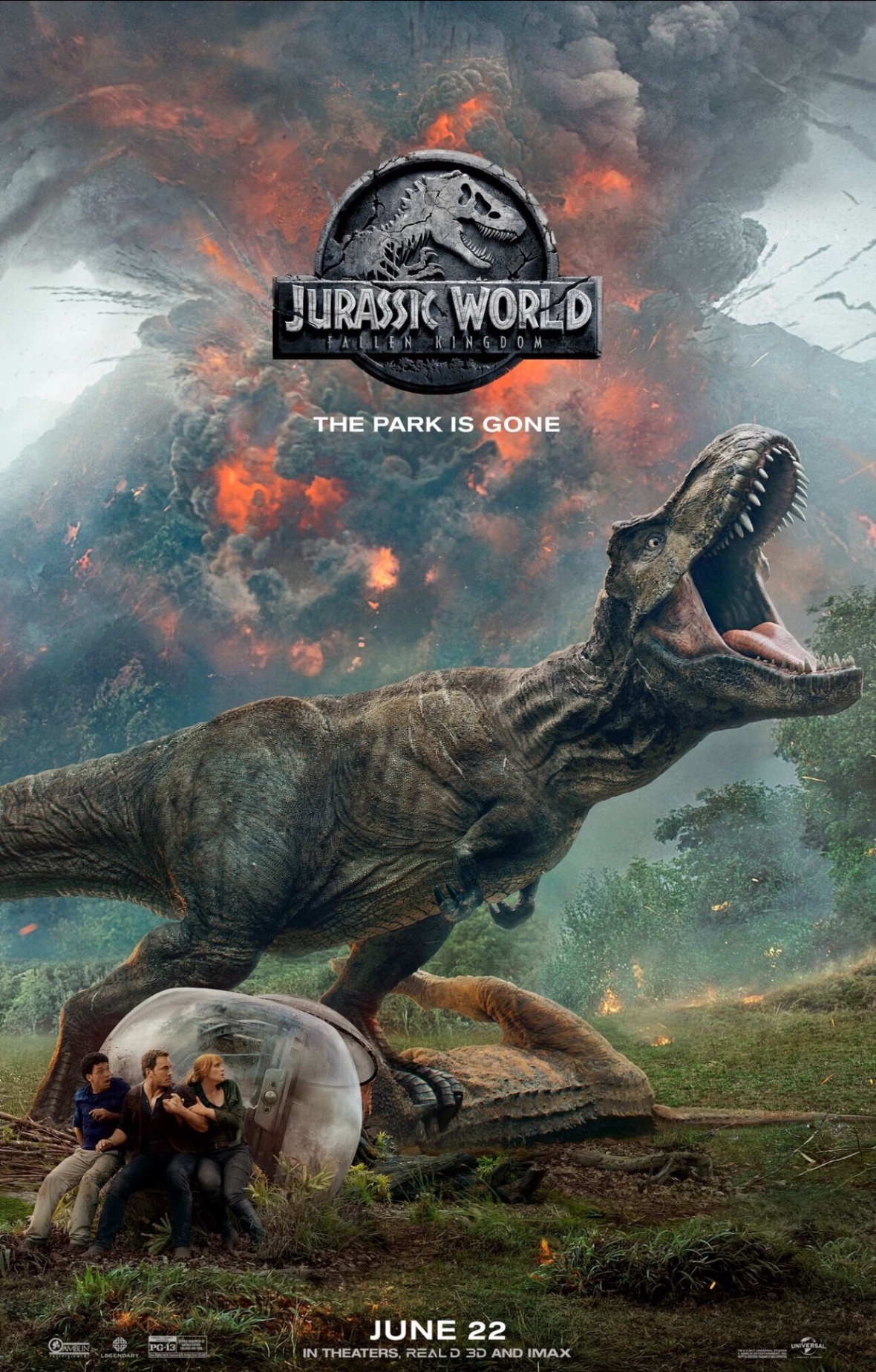 Empire Magazine has given Jurassic World: Fallen Kingdom five stars saying it ‘plays it both adrenaline-pumpingly huge and thrillingly small’. They described the film as ‘a summer ride that will drive kids out of their minds, and maybe even give the parents nightmares’.

Peter Bradshaw in The Guardian on the other hand gave it just two stars, acknowledging ‘some passable set pieces’ but objecting on the grounds that ‘the plot is contrived, the characters fatigued, the cliches abundant’.

Interestingly both reviews are right. There are some big contrivances and it is a little cliched yet it is still exciting, showing both ambition and reserve, and it does recapture some of the atmosphere of Steven Spielberg’s 1993 movie. It isn’t as good as the original of course, none of the follow up films have come close, but it is better than its predecessor and it does take the series off in a significant new direction.

One of the problems with the first two sequels; Jurassic Park: The Lost World and Jurassic Park lll, is that the story never found a convincing reason to go back to dino-island. In one case they made up a whole other previously unmentioned island and in the other it was all about rescuing some kid who’d accidentally parasailed there. Here though there is a highly believable excuse for heading back into the danger zone, in fact there are two depending on which characters you are following. That danger zone has brand new dangers too as the long dormant volcano at the heart of Isla Nublar has started to go pop. This also means that this movie isn’t just a retread of the monsters loose in a theme park/corporate complacency plot which was one of the main problems with the last movie. Jurassic World, like Creed, Star Trek Into Darkness and (I’m prepared to admit it) The Force Awakens was essentially a glorified but inferior remake of a decades old, much loved classic.

This isn’t to say that they’ve completely broken the mould with this new one. This is still a movie featuring insanely dangerous dinosaurs that escape captivity and eat people (spoilers). Jurassic World: Fallen Kingdom is a film of two halves though, the first wrapping up the old set up and the second taking it somewhere else, and while it looks like it is going to similar places as Jurassic Park: The Lost World, it doesn’t. (This said Jurassic World: The Lost Park would have been a very fitting title.) There are parts of this movie that are reminiscent of Jurassic Park but rather than just going over old ground this is picking up on what was good with that first film and replicating the successes. Remember that nail biting scene with the velociraptors stalking the kids in the kitchen? This film goes some way to replicating the same level of fear and tension.

Jurassic World: Fallen Kingdom also picks up on the best idea from Jurassic World; that of weaponising dinosaurs, and develops it a little further. I’d like to hope that the cinematic potential of this will truly be recognised in the final part of this second trilogy but it doesn’t seem to be going this way having now given new definition to the idea of a ‘Jurassic World’. Perhaps it will be seven, eight and nine that are the Jurassic War films. In the meantime this one’s title works on a few levels. There are at least three kingdoms it could be referring to; prehistoric, business or animal, but I won’t say any more on that for now.

Also carrying on from the last film are Bryce Dallas Howard and Chris Pratt and they continue to be strong screen presences. I may be beginning to tire of Pratts MCU persona but I’ll happily stick with this guy for another film. Joining the cast are several familiar faces but I think it is new director J.A. Bayona that is most welcome to the party. He doesn’t deliver any real emotional gut punches here as he did with A Monster Calls, The Impossible or The Orphanage but there are elements of his humanist sensibility and undertones of an examination of what it is to have life that we’ve not seen in these movies before.

There are several moments of real narrative convenience, as Bradshaw suggested, and the film is certainly of a particular type but it is an enjoyable jaunt if you are in the mood for it and I certainly was. It bites, soars and trundles along in all the ways it needs to and judging by this the series is slowly evolving.

There was a lot of criticism for Jurassic World because it had Howard running in high heels. I couldn’t see the fuss myself as to me this shows women doing something men can’t do rather than something men demonstrably wouldn’t. Nonetheless this movie directly addresses this having the first shot of the character being of her high heels before quickly putting her in sensible flat boots for the rest of the running time.

Howard’s Claire remains a strong female character and she drives plenty of the action. Laura Dern would be proud.