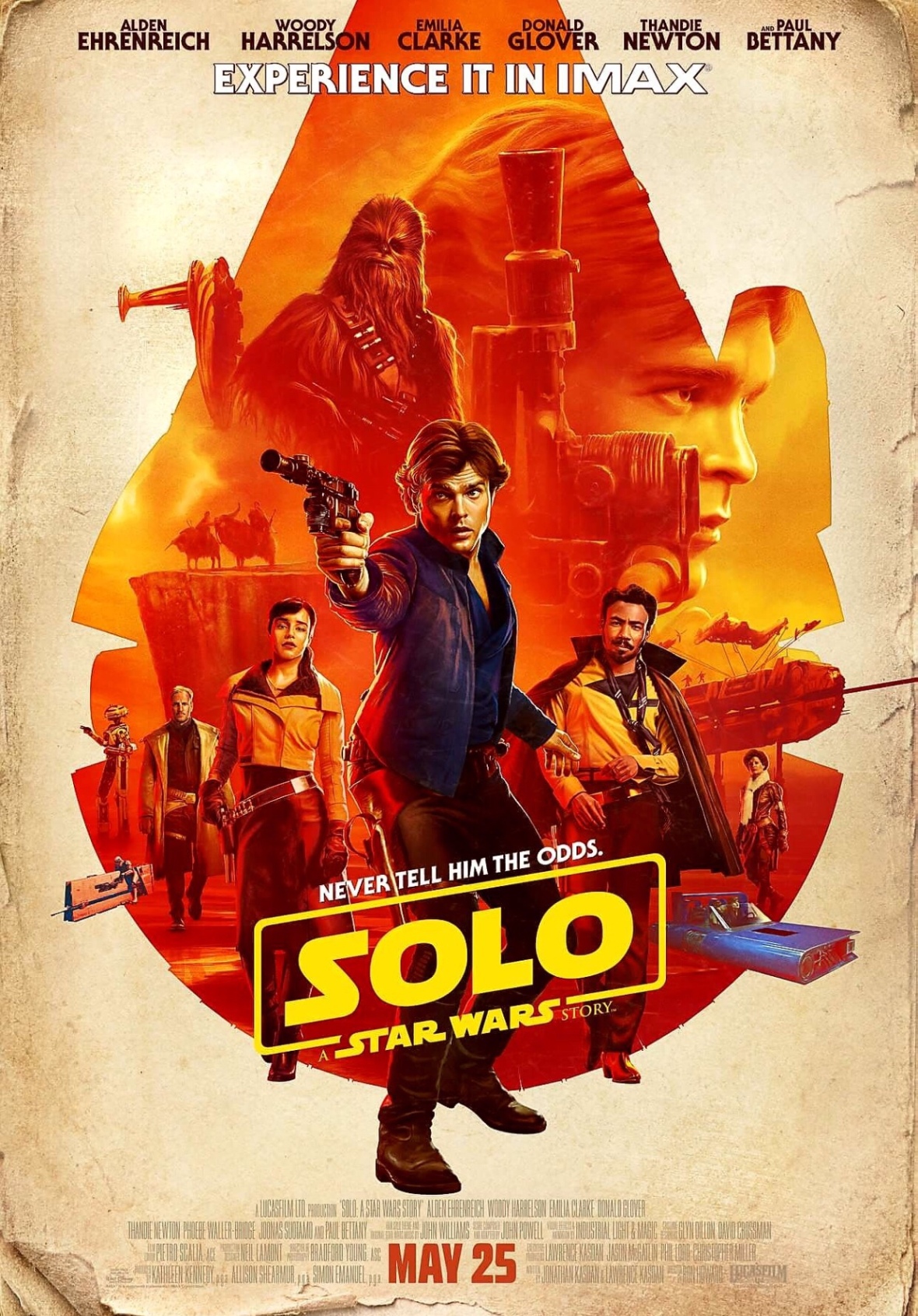 Solo: A Star Wars Story is a bit of departure for the Star Wars series in that it doesn’t tell any part of the bigger story. Rogue One was the first subsidiary instalment, and the first to use the phrase a Star Wars Story in the title, but that closely fed into the larger narrative. Even though it picks up one of the characters from the classic trilogy though, this film adds little to the ongoing saga. Solo is certainly a suitable name for the movie as it really is going it alone.

Unfortunately, I have to say that this works against it. Like Caravan of Courage, the 1984 Ewok TV film that briefly made it into cinemas here in the UK, it all feels very incidental. The Star Wars universe should be big enough to sustain new stories and I’m still optimistic for Rian Johnson’s post episode IX spin off trilogy but I’m afraid I just didn’t care about most of what happens in this movie. Of course I realise that this is because I went in with expectations and part of my problem is that these were not met but they chose to make this about Han friggin Solo so they created those expectations. If you are going to play with what is probably the greatest film character in modern cinema then you have to bring your A-game. They’d have been better to have centred it around Chewbacca.

Clearly there are bazillions of films that give you people you can engage with in 120 minutes or less. Events don’t need to be part of an epic saga to matter. Even removing this from the Star Wars connections though I didn’t feel that they did enough to connect me with everything. Characterisations are sketched pretty thinly and deaths that are presumably supposed to be upsetting have no resonance. The only times I really enjoyed the film were the few occasions it did actually tie in to parts of the story we know. Personally I think it needed more of this but that only shows that it needed to piggy back on Episode IV to justify its existence. Maybe they were consciously trying to do this as little as possible but they didn’t give me enough else.

Solo: A Star Wars Story is not a bad film. It just isn’t a particularly good one. My initial concerns, that Alderaan Ehrenreich was miscast, were unfounded. He actually did a pretty good job and having someone doing an impression of Harrison Ford would have been terrible. Other cast members were perfectly watchable, especially Donald Glover as Lando, and there was one new character called Rio that I really liked. The action scenes were diverting but little more and it certainly didn’t open up the mythology of its protagonist. The movie didn’t annoy me as some Star Wars films certainly have, although I think they’ve taken the droids with human emotions too far, it just didn’t draw me in and for good or for bad it is the first Star Wars film where that has been the case. This is a real step backwards for this series. It is as cautious and safe as The Last Jedi was bold and surprising.

Also, if Han can actually speak, not just understand but speak, Wookie then why didn’t he ever do this in any of the other movies? I’ll tell you why, because it sounds stupid. that’s why.

Solo: A Star Wars Story is not Bantha Fodder but I do think it is the first of these films that primarily exists to milk the cash cow so it is a bit of a scruffy looking nerf herder.

This is the first Star Wars film out of the last four not to have a female lead but women still figure in strong roles. What is good is that this is the norm for these movies now so it barely merits comment. Roll on the day that this is true of all cinema.

Kids are generally less demanding so sure. The rating is 12A but the violence is pretty consistent with all of the Star Wars pictures, even those back in the day that were rated U. It’s mostly gunfire and explosions. There is one weapon that isn’t a lightsaber but seems to use similar tech and one weapon that is a lightsaber that is really clumsily shoehorned in.

Final thought: Joss Whedon always said that his TV show Firefly was envisioned as a great story about what Han Solo might have done before he joined the Rebel Alliance. By lifting the aerial train heist, the rag tag crew of lovable hoodlums, the female first mate and the entanglements with dangerous mob bosses from that series it seems that director Ron Howard and his writers watched it and thought so too.

One thought on “Solo: A Star Wars Story”