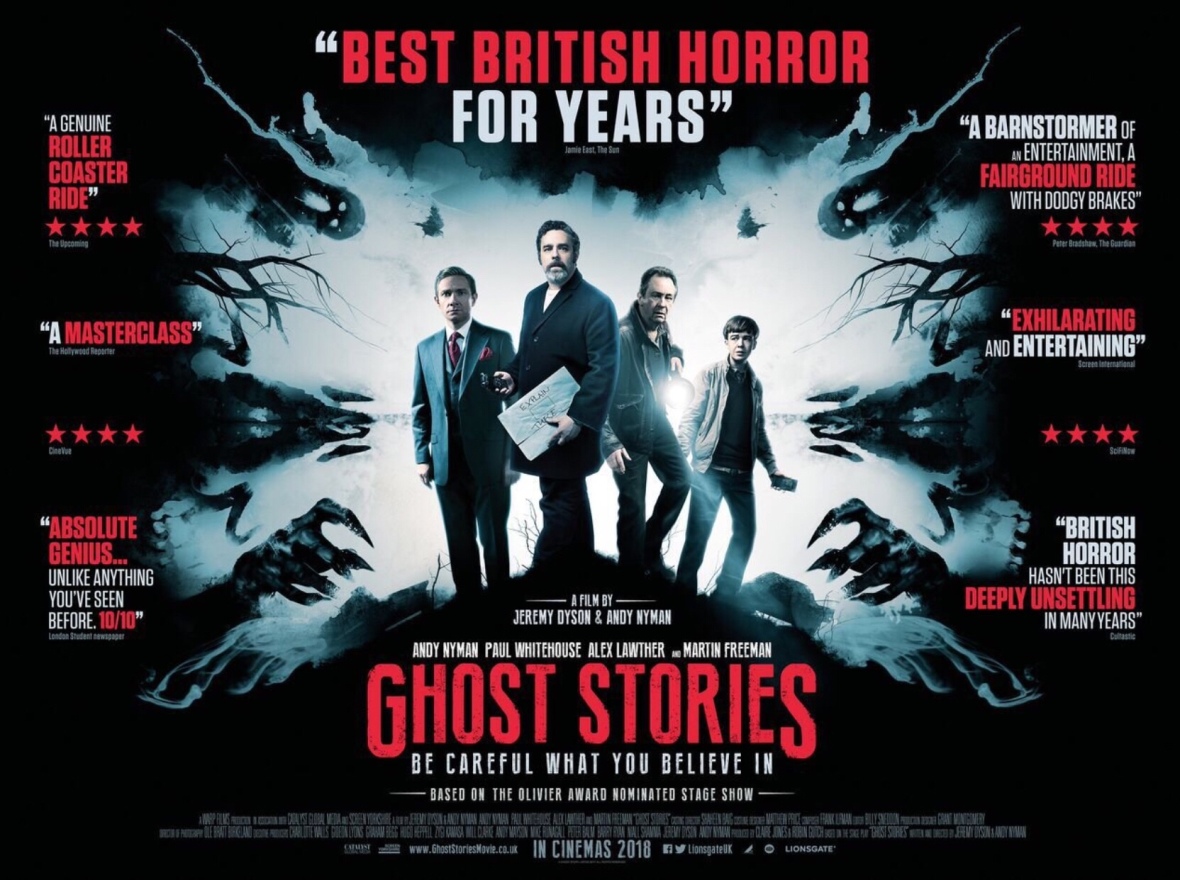 Let me list a few of the things that have scared me on screen. The Woman in Black had me so on edge that I had to pause it to create a break in the tension. Scream gave me a brief phobia of turning on patio lights. The Grudge actually made me yell out loud in the cinema. Even The Birds which was dated by the time I saw it but is really chilling when you consider what little chance humanity would have if natured turned on us like that.

Let me tell you one thing that didn’t scare me; Ghost Stories. The part of The Grudge that prompted my undignified and highly audible public exclamation of fear happened in one of the quieter moments. Sarah Michelle Gellar was on a bus (yes, it was the US remake I watched) in broad daylight and the ghost’s face suddenly turned up at the window. I wasn’t expecting it and it surprised the hell out of me. The problem with Ghost Stories, like last year’s It, is that all of the scares are very heavily signposted. You know they are coming and you are braced and ready so they have little effect. Of course the film made me jump on a few occasions but it didn’t frighten me at all. It did play with the idea of bringing the chills into the quiet moments too but much less effectively. The plot has a paranormal debunker investigating three ghost sightings so you see these incidents played out punctuated by scenes of the guy sitting in brightly lit spaces talking to them. The lines between the stories and reality do become blurred but once the film shows it’s hand in this respect you are ready for creepy things to turn up there as well and it loses its power.

The way the tension in cranked up is masterfully done but they’d have done better if they hadn’t tried so hard to terrify. The Orphanage, The Others and The Devil’s Backbone are not very scary films but they are all brilliant because of the atmosphere they create. In those films the tension is not released with jump scares so it isn’t released, it is sustained. Sometimes, in fact always with horror films, less is more. Ghost Stories certainly has some interesting ideas and the end, which is too extreme to make you scream, is by far the best part. The denouement is a tiny bit of a cop out in how it explains how all the creepy happenings have occurred but it does present its most unsettling idea when you realise what the protagonist is actually living through.

Ghost Stories is based on a play of the same name and watching the movie I wondered how on Earth it would of worked on stage while suspecting it worked better. It is all well made and the performances are good but for me it didn’t succeed in the one main area it, and the poster quotes, promised it would.

This is not one for the kids. I was able to handle it but I can see that there are others who may not and I would imagine that most people below the recommended age of 15, and a few above it, would be included among them.

Women are notable in this film by their absence and unlike other stories about men I am not sure that this was strictly necessary. What this does present is an interesting reading about masculinity and the fear and guilt of not measuring up to expectations in this area. Most of the women in the film are ghosts, the strong spectral female is an object to fear, and rather than this being sexist it says curious things about male inadequacies and their perceptions of weakness. It is no accident that the character mentioned early on that shares the lead character’s eventual fate is female and that he misguidedly imagines what happens to him to be in some way less than male. I wish the film had spent more time exploring these themes and less trying to make me drop my popcorn.