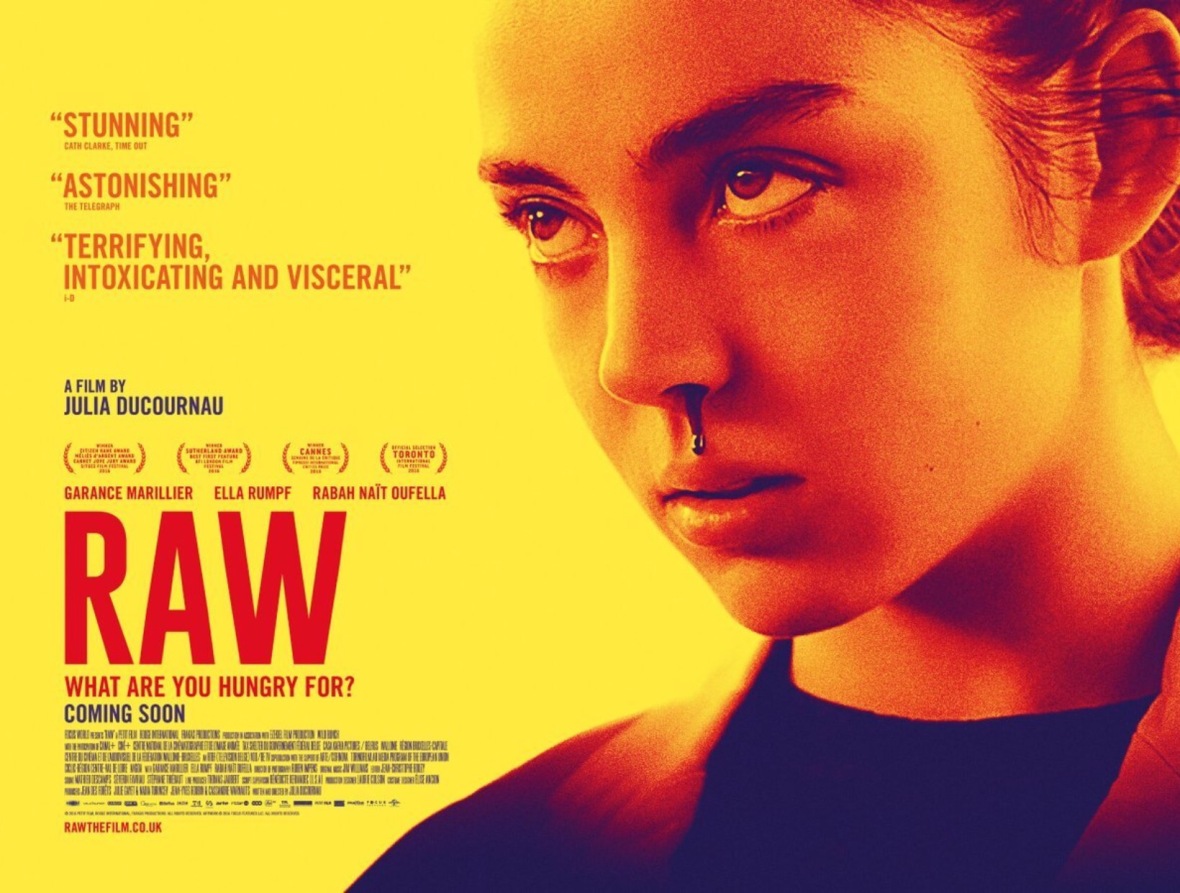 Raw is a word I, and others, have occasionally used to describe the tone and nature of other movies. I tend to relate it to films that are highly realistic in their depiction of unpleasant, often violent human interactions. If I’ve said a film is raw it means that it shows things happening in a way they would genuinely happen, unfiltered through a Hollywood less and not played out in a stylised manner. The Revenant is raw, La La Land is not. Parts of Logan are raw, X-Men: Apocalypse is not. The battle scenes in Hacksaw Ridge are raw, the rest of it is not. This new French film, streaming now and out on disc on 14th, is titled Raw and in every sense of the word I’ve explored here it definitely suits the name.

The story follows Justine as she goes to college to study veterinary medicine. Her sister is already at the school and her parents are part of the same profession. The whole family are very strict vegetarians but during a initiation for newbies Justine is coerced into eating a rabbit kidney and it has a surprising effect on her. The treatment of the freshers at the hands of the older students is mean even before she is made to consume raw meat and it is here the movie starts to fit its title. During her first week Justine is pushed around, bullied, borderline abused and generally humiliated. All of the parties she attends are full of dispassionate teens and twenty somethings having a fairly debauched and drunken time. It is quite discomforting to watch and by the time the other, more literal, reason for the film’s moniker becomes clear it is almost a relief to see the protagonist develop a strong sense of agency, even if this is driven by her sudden taste for human flesh.

Make no mistake, Raw may start off like a social drama but it is actually a full on horror film. It doesn’t rely on jump scares and freaky looking spectres though like other examples of the genre, it is better than that. It earns its place as a horror movie by being properly horrific. It is measured in this though, showing more restraint than the wave of gorno films like Hostel and Saw that were popular a decade ago. Most of the nastiness is actually suggested (most of it) and it is well paced and subtle in the way it slowly eats in to you.

If you can handle a bit of gruesomeness then I would recommend Raw. (Apparently at the Cannes Film Festival people threw up during the screenings but there are all kinds of stories about audiences having extreme reactions at Cannes and they are nearly always exaggerated.) Raw is sophisticated in its build up and is very skilfully directed and performed. The story does not go where you think it might, and certainly not were it would go in most American films, and it actually has points of real sweetness even in the midst of its darkest moments. It isn’t always nice but it always knows exactly what it is doing and it is consistently smart.

No, only The Handmaiden has been a less suitable film for children this year. Raw is rated 18 and I do not suppose the good people at the BBFC had to think very long about that classification.

Well, Raw is certainly a female driven film but it’s not exactly feminist. Fortunately neither is it sexist as a lot of horror films have been in the past. Both Justine and her sister are strong characters and they are able to stand up for themselves but they are certainly flawed. There is a small element of the siblings fighting back against male oppression but not in a way that makes them role models. Crucially though the movie is able to make you side with them despite both of them doing some abhorrently despicable things. The film celebrates sisterhood easily as much as Frozen only in a much, much darker way.

One thought on “Raw”