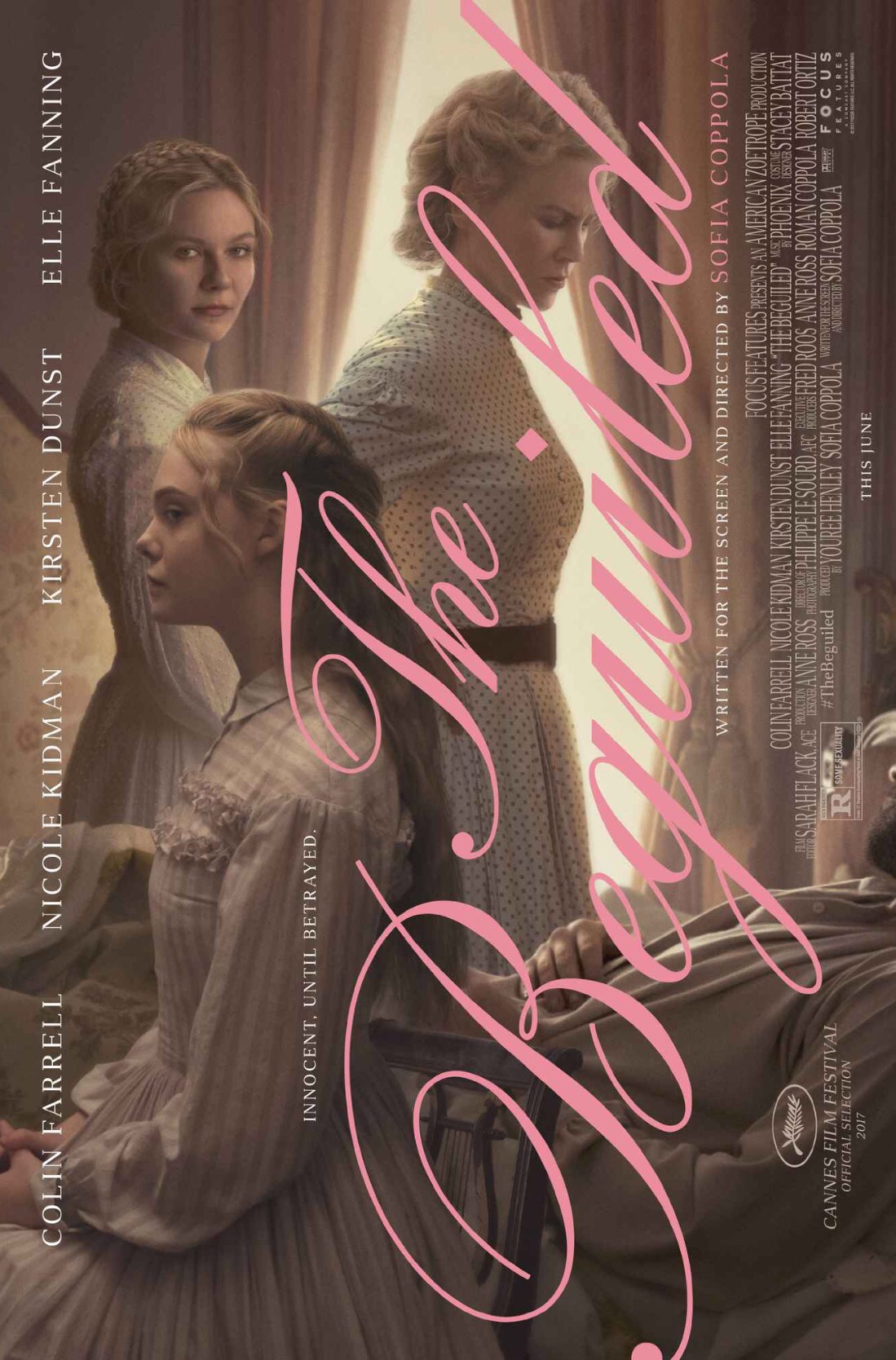 The Beguiled is the second adaptation of a novel about an injured American Civil War soldier who is taken in by the inhabitants of a girl’s school in Virginia that is not known for being forward thinking with its gender politics. The females in this publication are presented as weak and simpering in the presence of this man and they suddenly lose all capacity for rational thought. Either they are pathetically bewitched by him as the title indicates or as the original name of the book, A Painted Devil, suggests they are cruel and vengeful when their affections are not returned. Certainly the first film, released in 1971 and starring Clint Eastwood, does absolutely nothing to challenge the inherent sexism in the story. Now though Sophia Coppola has taken this source material and retold it from the pupil’s and teacher’s point of view giving them a real sense of control and autonomy. It is as though someone has taken Disney’s Song of the South or the 80s film Soul Man and remade them as a powerful parables about civil rights. It is also of note that with this movie Coppola has become the first woman to win the best director award at Cannes since 1961 and only the second in the film festival’s seventy year history. All in all this is a win for feminism. The Beguiled is undeniably an important film for women in cinema.

And yet I didn’t love it.

In its essence feminism is clearly about equal rights and balanced power between the sexes. The Beguiled ticks these boxes easily but in relation to media representations of women and girls it is also about providing good and realistic role models on screen. Certainly as a parent that’s what I want my three daughters to see. It isn’t a criticism of the film but the characters depicted here do not behave well and there is uncertain justification of their actions when they begin to act on jealousy and betrayal. This makes The Beguiled an interesting film but it doesn’t celebrate the positive power of women. I didn’t come out punching the air like I did (figuratively) after Wonder Woman, Moana, Hidden Figures or Mustang. There is equality in the representation of the sexes but only because everyone does bad things, neither males or females come out of it well.

Crucially there was no one in the film I felt I could root for. I accept that everyone is a product of their circumstances living in a repressed war ravaged society and this has changed them but these are people driven by fear, lust and anger and it has made them cold and selfish, all of them. Is this realistic? Under these historical and sociological circumstances I guess so but are they role models? Definitely not.

The movie is well directed, Coppola deserves the accolades, and the performances are superb, not only from Nicole Kidman, Kirsten Dunst and Elle Fanning as the older residents of the school but from all the cast. The four younger girls are not marginalised when the sexual politics take over and are equally complicit in events. It also flips the idea of the male gaze on its head which is to be celebrated and plays nicely with ideas of victim and victor. In the end I clearly went in expecting and wanting something different which I didn’t get. Please don’t let this stop you going to see the film though, mine is an entirely personal response and one that undoubtedly says interesting things about me as a man, but this wasn’t the type of feminism I readily favour.