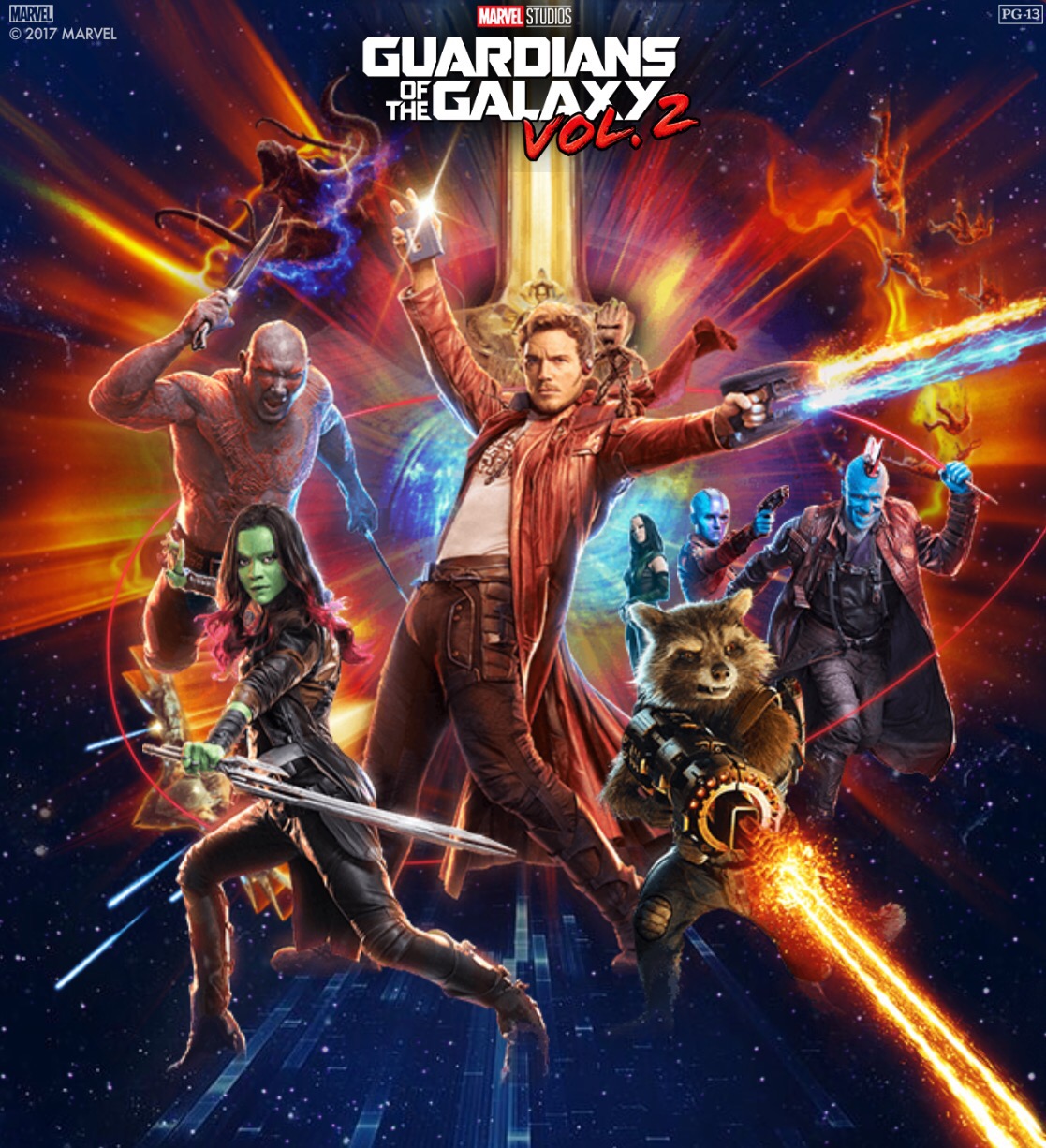 .
The Marvel Cinematic Universe films have always been about character and that is predominately what has kept them going. Sure, there has been some smart, witty writing and they’ve created and played with genre conventions along the way but the reason this series of fifteen movies has been so successful is because they have consistently provided audiences with heroes they immediately like and care about. Giving less importance to this is exactly why competing superhero studio DC/Warner Bros is failing so dramatically by comparison. Marvel’s latest film does this even more than before though. Guardians of the Galaxy Vol. 2 is literally all about character because those characters, superb as they are, are really all that it has. Starlord, Gamora, Rocket, Drax, Baby Groot, Yondu, Nebula, wonderful newbie Mantis and the actors that play them totally carry this movie. The rest of it is exposition heavy, indulgent, occasionally misjudged, sometimes too obvious with its jokes and often pretty stupid.

The plot, as it stands, is like a series of those one shot mini movies the studio used to do. There is the one about Starlord’s mum and dad, the one about Gamora and Nebula’s sibling rivalry, the one about the dissension among Yondu’s crew, the one about Sylvester Stallone’s character and how he got back together with the comic book’s original Guardians line up and the one with Baby Groot dancing. Each of them is entertaining in its own right but ultimately they are inconsequential, underwritten and overlong. They also don’t quite fit together into a narrative whole.

As well as this there is quite a lot in the film that pushes the boundaries of what is easy to swallow, even in this outlandish context. It jumps the shark over and over again, it is doing shark hurdles, and frankly if you didn’t love the first Guardians of the Galaxy film then you are going to find it very hard to be patient with this one. In places it actually feels more like that terrible Adam Sandler alien invasion movie Pixels than the Avengers. It is really corny in places too and I fear it isn’t always being ironic. It is as though it thinks that because it punctures some cliches early on it then it has free reign to be as cheesy as it likes toward the end.

I wouldn’t say I was disappointed by the film because it is still a lot of fun and, as mentioned, the characters are excellent. However with a little more focus and a little less belief in their own press Marvel could have made a much better movie. After the similarly enjoyable but prosaic Doctor Strange the MCU films are actually now getting progressively worse and I’m sorry to say it but this is the first sign Marvel have shown of going off the rails. I actually don’t feel compelled to watch it again. I’ll buy it because I’m a Marvel completist and I’ll quite probably grow to love it with repeat viewings but I have to say, I’m not there yet.

.
Is this one for the kids?
I’m afraid I need to be critical here too because as well as being undisciplined the movie is also quite amoral. There is a scene early on where the Guardians start blowing a fleet of attacking ships out of the sky and it initially seems cold and brutal as the alien race in question is only trying to retrieve something that Rocket stole from them. Any discomfort in this is side stepped when it is pointed out that the craft are piloted remotely (cue a gag that becomes laboured pretty quickly). Later though there is an extended sequence where we are asked to enjoy the fun spectacle of a different group of people being joyously massacred. It’s in pretty poor taste for a 12A family film.

.
The Ripley Factor:
Here the film gets it unequivocally right. Of the seven and a half main characters, three of them are women so that’s almost balanced. Zoe Saldana’s Gamora continues to be strong and wise, Karen Gillian’s Nebula is totally worthy of the increased screen time and the aforementioned new girl Mantis is immediately important to the story. Pom Klementieff’s performance in this role should be star making but it going to be hard for her to do anything similar in any other movie. The part is not a million miles away from Ophelia Lovibond’s role as Carina, the collector’s assistant, in the first film. Mantis is also there to serve a powerful master but unlike Carina she isn’t a disposable plot device, she makes a big difference and is a welcome addition to the gang.

Peter’s mother Meredith is very important to the plot too but she has to be dead for this to be the case so it’s a classic case of the Rebecca Principle.