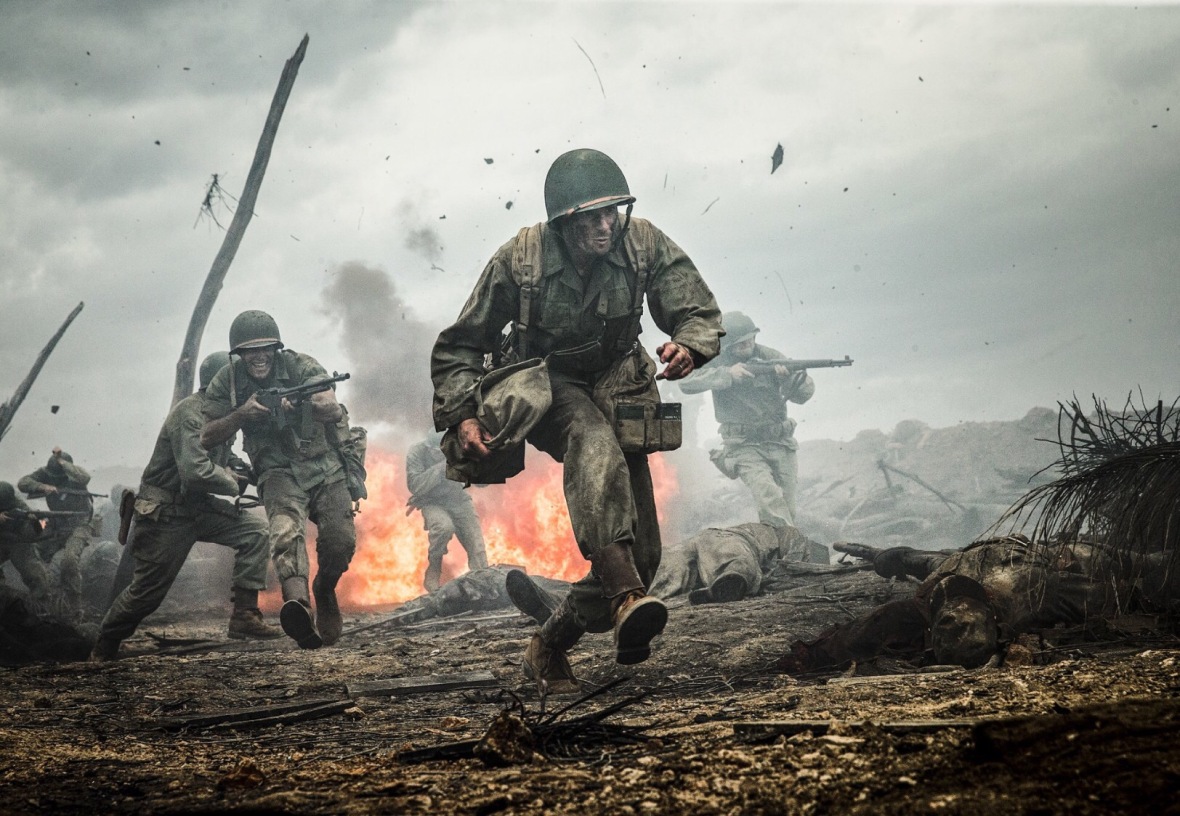 Hacksaw Ridge does not start well. I’m not referring to the random opening seconds that flash forward to harrowing battle scenes so as to establish the brutal WW2 film that it will become, I’m talking about the whole first hour.

We’ll get to the fighting later but it has to be said that the first half of the film is really hackneyed. It’s purpose is clearly to introduce us to Desmond Doss and to show us what a great, straight up guy he is. He loves his Mum, he confronts his bullying father, he jokes with his brother, he saves a guy after he gets crushed by a car, he courts a pretty nurse. The whole thing swings back and forth from cheesy to melodramatic demonstrating no film making finesse whatsoever. There is even a slow motion gaze as he sees his future sweetheart for the first time. In fact there is lots of thoughtful staring; exactly the kind of thing Joey in Friends called ‘smell the fart acting’. The film it most reminded me of in these early stages was Pearl Harbour. It might have been trying to be old school but it ended up cornball.

Things change slightly when our hero enlists and heads off for basic training but not immediately for the better. It is here we meet Vince Vaughn’s drill Sergeant. My initial reaction was how refreshing it would be to see the actor do something other than comedy but then I got a little confused as he appeared to be doing comedy. The moment were he addresses his platoon of new recruits for the first time and gives them all nicknames was like a poor SNL skit on the similar scenes from An Officer and a Gentleman and Full Metal Jacket.

Then as Andrew Garfield’s Doss faces court martial because his religious principles forbid him from touching a firearm you begin to realise that at the heart of this film is the true story of a very courageous man whose acts deserve to be told of. Although I remain dubious as to if he ever actually faced court martial and if he did I’m sure it wasn’t his Dad who saved the day and I suspect his Dad wasn’t really an abusive alcoholic. Still, there was a film to be made out of this and the fact that Doss saved numerous lives and was the first (and in WW2, only) conscientious objector to be award the Congressional Medal of Honour clearly isn’t enough.

Once in conflict though the tone of the movie changes dramatically and you are left under no doubt as to the level of the bravery that Doss, and all of these soldiers, showed. Here the film is brutal. A good friend of mine, who it should be noted was himself an army medic in Iraq, suggested to me that Hacksaw Ridge made Saving Private Ryan look like Dad’s Army. Director Mel Gibson shows little of Spielberg’s craft but in terms of the realistic and raw depiction of bloody combat this does push things up a level. I would say that in terms of showing human beings coming apart it makes The Thing look like The Lego Movie.

In the end it is hard not to be moved by the film. It is a good half an hour too long, the representation of the Japanese is totally one dimensional (I can’t see it appealing to that important market) and that beginning is terrible but ultimately Hacksaw Ridge is an appropriate tribute to this one hero and many like him who face incomprehensible violence in the defence of others. You’ve got to salut it for that.

Is this one for the kids?
Yikes no! I am gobsmacked that this film is not an 18 certificate. This confirms that sensibilities have changed and the only thing that is going to push a movie into that higher rating now is explicit sex. I have a 15 year old daughter and I would be mortified at the idea of her watching this film, in my opinion she is not ready. I suggest that you walk very cautiously into this war zone.

The Ripley Factor:
There are only two women in this film, Rachel Griffiths as the mother and a Teresa Palmer as the girlfriend. They are both treated well by the material in terms of the gender politics and they both give good performances but unfortunately theirs is the trite part of the movie I could have done without.