.
I was so ready to love La La Land. It has had nothing but good things said about it since it first turned up on the festival circuit last Summer and is getting lots of awards and nominations. It is also known to celebrate a certain old school movie genre, which should put it right up my street, and I have been listening to the delightful soundtrack all week. Of course this all brings a dangerous level of expectation; there was a chance that it may not have lived up to my hopes.

As it was, it exceeded them. La La Land is a wonderful wonderful film. Don’t worry, it really is as good as they are saying it is.

The relatively simple story tells of Mia and Seb (Emma Stone and Ryan Gosling acting opposite each other for a third time) falling in love in modern day Los Angeles. She is a wannabe actress, he a struggling jazz musician. The plot is straight forward (until the glorious ending at least) but it is all done with immense charm and glorious song and dance numbers. It will draw comparisons with The Artist but it is a much better film. The Artist was heavily derivative in its homage to the movies that inspired it but La La Land manages to be referential while still feeling original. Familiar as it is, it still has its surprises.

I was critical of director Damien Chazelle after his last film Whiplash. I thought his writing was excellent (he performs both duties here too) but I thought a more skilled film maker could have got a more nuanced performance out of J.K. Simmons and some of his edits were a little cheesy. (Read more on this here.) In this though he is showing real cinematic expertise. Some of the framing may still be a little cliched but there are a series of long shots in the musical set pieces that are just brilliant. The opening scene, as one example, has the camera sweeping all around the action as if it is dancing in its own right.

Another aspect they have got beautifully right is the casting having got the two single most adorable people in the whole of Hollywood (sorry Jennifer Lawrence). Stone in particular is radiant, fuelling her performance with huge heart and conviction and she combines those eyes with that smile in a magnificent range of facial expressions. Ryan brings effortless cool coupled with touching kindness and humanity and they have a chemistry that rivals Bogart and Bacall. All this and they tap, sashay and pirouette too.

There has been a suggestion that La La Land is another example of the American film industry’s indulgent love affair with itself but whether this is a motivation or not it doesn’t matter; many of us love US cinema and its rich history too and are totally happy to be immersed in it. This film may not be biting or challenging but neither is it just fluff. What it is is totally joyous. I cannot recommend it highly enough, everyone should see it. I wanted to watch it again immediately after it had finished.

La La Land is rated 12A presumably for its tiny amount of swearing. I wouldn’t have a problem taking any child over ten and once it is out for home viewing you might even want to go younger than that. The musical parts will entertain little kids too, they might just get fidgety during the rest.

La La Land is probably Mia’s story slightly more than it is Seb’s but it is pretty balanced. There is no nudity, no objectification, everyone is important to the plot and everyone will have a tremendous time watching it.

I’m trying to work out where in my house is the best place to hang the poster. 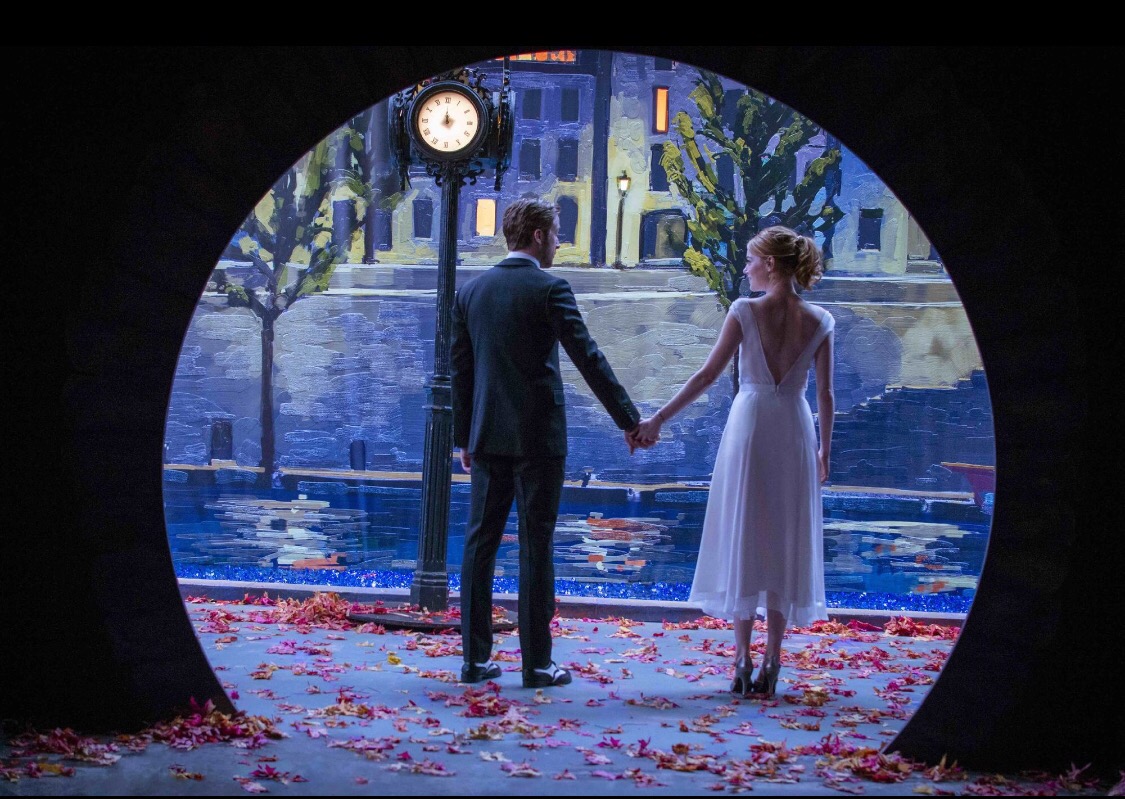