The one thing you need to know going in to X-Men: Apocalypse is that it’s all pretty stupid. If you can accept that then you might have a good time with it it but it is overblown and nonsensical and it is certainly a disappointment after the last film, Days of Future Past.

The main problem is the story. The Marvel comics have a history of plot lines featuring incomprehensibly powerful beings, normally gods that have come from outer space with world destroying capabilities. Galactus is one such character. He floats around space, devouring planets on a whim, with his more iconic compadre the Silver Surfer going ahead of him. These epic tales of our regular mortal heroes taking on cosmic behemoths do not work so well in the cinema; they’re just too silly. To be honest, they don’t work on the page that well either. Galactus was actually the bad guy in the second Fantastic Four movie but they had to change him from a frowning giant in a silly purple hat to a substance-less gas cloud for there to even be a chance that he would translate to the screen. The story of Thanos and the Infinity Stones, which is the set up for the Avengers next outing, is equally ridiculous so we will have to see what they do with that.

The big bad in this new X-Men film is more earthbound but he is no more credible. I know that the ‘gifts’ of everyone in this world are implausible but this is a guy with infinite abilities in controlling minds and matter. He can open portals between different locations, bestow enhanced powers (and outfits) on those around him and, in the right circumstances, can transfer his consciousness to someone else. I’m sorry but I’m not buying it; it’s a step too far. In my opinion unlimited power is just poor story telling. Yeah, yeah, I know he’s been around for millions of years amassing the powers of others, yadda yadda yadda. It’s stupid.

His appearance doesn’t help. Okay, he’s blue, I can go with that. With Mystique, Beast and Nightcrawler this does seem to be a bit of a trend in the mutant world. The smurf gene clearly runs dominant. Setting his colour aside though, he still looks like a spray painted turtle who fell in a box of cookie cutters. Seriously, he reminds me of one of the henchmen from Mighty Morphing Power Rangers.

The film has other problems too. Moving away from Apocalypse but staying with the costumes, let’s discuss Olivia Munn. Munn plays Psylocke who can generate an awesome psychic purple blade from her arm. She is mean, she is formidable, she is cool, she is sassy but she is also wearing high boots and a swimming costume. The look is right off the page of the nineteen eighty sexist six comicbook and adherance to the outdated source material has not served any better here than it has with the plot. I thought we had moved past the objectification of women in these films. 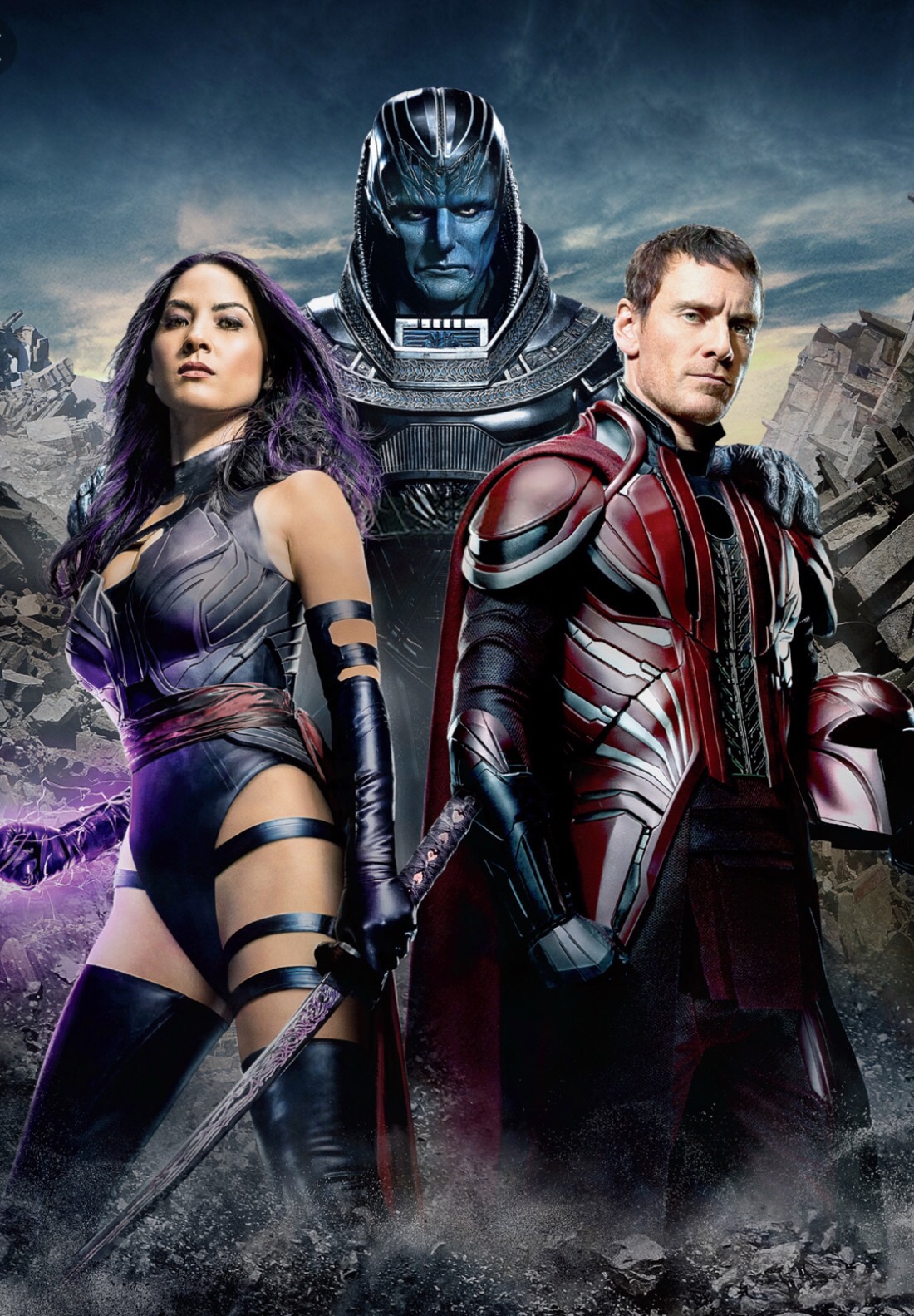 In fact generally, X-Men: Apocalypse seems to be a real step backwards from all of the progression made in superhero movies over the last ten years. It doesn’t have any self awareness, it isn’t grounded in modern sensibilities, it doesn’t avoid cliche, the character development is weak and it ignores the genre’s latest trend of social consciousness. In this last aspect it really fails; buildings and people are amorally annihalated like there’s no tomorrow. Which brings me neatly to my next point; in the period in which the film is set there are still plenty of tomorrows but they are ignoring that.

Allow me to elaborate; the movie is set in the decade in which many of its new characters debuted on the page. In X-Men: First Class it was 1962, in Days of Future Past it was 1973 and here it is 1983. (The typically 80s feel of the villains, the costumes and the plot might be due to this but I’m not accepting that excuse.) The problem is that you can blow up the Sydney Opera House in a modern film because I guess that could happen but you do it here because it didn’t happen. Don’t come at me with your alternate timeline response, if you want to set it in my world then set it in my world; a world in which Australia’s most famous building is still in one piece.

The plot loses sight of reason elsewhere too. At one point Magneto is generating a huge magnetic field that is so powerful it is tearing down cities all over the world yet a big metal jet plan is flown into the heart of it with no problems whatsoever. Also there is another bit, like the one in the previous film, where Quicksilver dashes around while everything moves slowly around him but the scene doesn’t appear to obey its own laws of physics. I get that he can propel himself quickly but why would a table that’s been blasted out of a window by an explosion move faster because he’s standing on it? This was done better before, in both Days of Future Past and in that laboured Sky Broadband advert.

In the end the biggest issue is just how run of the mill the movie is when the X-Men films have previously been so instrumental in redefining the genre. This series was the first to have lots of heroes joining up and fighting alongside and against each other, it has always had great parts for women and there was a clever allegorical subtext behind it but that has gone altogether.

On the plus side the one scene featuring Wolverine is superb. It totally rewrites the clumsy origin the character had in X-Men Origins: Wolverine and is worth the admission price alone. There is a post credit sequence related to this that introduces a character called Nathanial Essex. In the comics Essex, under the name Mister Sinister, created a female version of Wolverine so if that is where the franchise is heading it could be interseting.

There are plenty of key women in the film, all empowered and all holding their own against the boys. It is just a shame that they are too often dressed in a way that shows off their bodies. Psylocke we have talked about but Jennifer Lawrence’s first scene as Raven also has her in a T-shirt with a neck line that plunges down to her waist. Incidently the aforementioned Mister Sinister also creates a clone of Jean Grey called Madelyne Pryor. Pryor traditionally has the most inappropriately revealing costume of any female comic book character ever so I really hope this is not a trend they continue with. Google it, but not while you are at work.

X-Men: Apocalpse is rated 12A but it is at the high end of this classification. Even aside of the cleavage there is strong language, bloody violence and beheadings. I would say check it out yourself before you take anyone under ten.