A contemporary film of Miss Julie directed by a woman is immediately an interesting prospect. It isn’t that it’s the first time a female has called the shots on a celluloid version of Strindberg’s play; the first ever screen adaptation was helmed by Swedish actor and music hall artist Anna Hofmann-Uddgren in 1912. That was a very different time though, with very different notions of feminism. The stage production had only premiered twenty three years before Hofmann-Uddgren’s movie and back then the idea of a female character who was forthright and commanding was still fairly progressive. In the play, presumably as in this early film, Miss Julie shows her independence through aggression and the wielding of her social standing as the daughter of the local Baron. Her status as a strong woman is tied closely to notions of a patriarchal society and demonstrations of typically masculine traits. In fact it is explicitly stated that her mother raised her to be like a man. While this may have been forward thinking a hundred years ago it doesn’t really sit well with modern ideas of gender equality. •

One of the most popular English language translations of the play was written by dramatist Helen Cooper but the relatively few TV and film adaptations that followed Hofmann-Uddgren’s film, as far as I know, have all been headed up by men. The most prominent of these is probably Mike Figgis’ 1999 production, for which Cooper provided the screenplay, but we’ve not yet had a version that truly gives a modern women’s perspective. So it is that a 2015 release written and directed by Liv Ullman is something I was always going to be interested in.

Ullman is an experienced film maker who has worked with many of the greats of European cinema including both Bergmans, Ingmar and Ingrid. Much of her previous work as a director has focussed on women and their experiences with everything from adultery to antiquated male lead feudal societies. It seems natural then that she would want to tackle Miss Julie, a story that revolves around a woman of the ruling classes having illicit relations with a man servant.

I have to say though that all my hopes of a new and interesting feminist take on the play have gone unrealised. For a respected work that has been around and regularly performed, on stage at least, for a century there are quite a lot of different ways to present it. It isn’t like one of Austen’s or Dicken’s stories where there are a series of key events that always have to play out in the same way to move the familiar narrative forward. There are essentially just two key events that you have to include to stay faithful to the plot and actually one of these carries considerable ambiguity in how it happens, or indeed if it really happens at all. I shall return to this later, continuing to speak about it in nonspecific terms as it concerns the denouement, as it is key to the final representation of the female protagonist.

Leading up to this most of the play shows an ongoing conversation between aristocrat Julie and the valet Jean, renamed John in this version. First off you get the seduction and then the consequences. Even when sticking to the text of the play it is possible to totally alter the characterisation by changing the way the lines are delivered. It is easy to show Jean/John as complicit or compliant, predator or prey, without changing a single word that is spoken. Similarly Miss Julie can be either someone who is longing for some kind of human connection or is toying with her subordinate. She could be confused or commanding dependant solely on inflection and body language.

Here, with Jessica Chastain as Julie and Colin Farrell as John, their motivations seem confused, veering from one place to another. He, by turns, comes across as a schemer, a stalker, a puppy and a puppet and she is a horny status obsessed sociopath on the verge of a full psychotic episode. The performances are strong but it is difficult to identify or sympathise with either of them and neither stands as a positive role model. Personally I found it overwrought and melodramatic. There is over two hours of this and as a result the film is a bit of a slog.

I was expecting Ullman’s Julie to be more balanced and considerably more in control. It would have been good to have seen a greater connection between the central duo as well, possibly even some affection from one side at least. Either side would have worked. Certainly if you look at the poster for the film it seems that it is being marketed as a period romance, there being an undeniable pattern to the promotional art for such movies (see below), but this is not what it is at all.

As originally written Julie is a tragically passive woman and this unfortunately is emphasised more than challenged by Ullman’s film. The aforementioned ending is open ended on stage leaving her ultimate fate open to some interpretation. She leaves the single room set with apparent intentions in mind but where she actually goes, what she actually does and what actually happens to her is literally unwritten. The potential in this ambiguity is huge and allows directors complete freedom in how they leave things. Does Miss Julie escape unjudged and unpunished? Does she take control of her situation? Might she stand up against the oppressive sexist world she was born into? Could she in fact, on some level, be a feminist figure? Somewhat surprisingly in Ullman’s vision the answer to all these questions is no. In the end it is the female director who chooses Miss Julie’s misogynistic fate and not the male playwright.

Of course in doing so Ullman is still making a feminist statement and by setting her on this path so was Strindberg. That’s the thing though; we’ve had this version since 1899. Perhaps it was wrong to expect it but I wanted something new. This Miss misses this.

Liv Ullman’s Miss Julie is in select cinemas and available for download now. 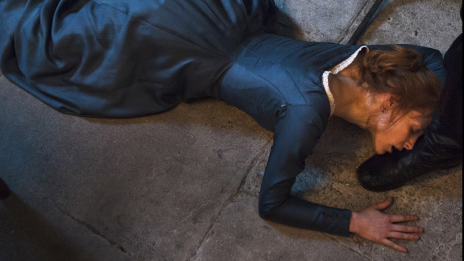