Fifteen years ago TV was to film stars what panto was to soap actors, the place where careers go to die, but Kiefer Sutherland changed that. Now there are many big Hollywood names doing excellent work on the small screen and the soap stars have a selection of different reality shows to humiliate themselves on instead of signing up for seasonal theatre. (To be fair, that second thing had nothing to do with Kiefer Sutherland.)

What hasn’t altered though is the small screen’s capacity for giving actors a foot in the Hollywood door. There are some who have never been properly able to capitalise on their amazing television work, Sarah Michelle Gellar comes to mind, but there are also those who have managed to use the box as a spring board to the A-List. Clint Eastwood, George Clooney, Mila Kunis and Kristen Wiig would all be good examples but there are many many more.

I’m wondering then, who among the huge ensemble cast of the phenomenally successful UK show Downton Abbey will succeed in making this leap. A few of them have already started their run up but I’m afraid there might have been a few missteps.

Poor Lady Sybil. Her final episode is easily the most heartbreaking moment in four years of Downton Abbey and that is saying something when you consider what happened with Matthew. So having battered our souls what did Jessica do next?

A New York Winter’s Tale, released on Valentine’s Day this year, also takes you on a bit of an emotional journey but perhaps not in the way they intended.

Lady Sybil plays twenty one year old Beverly Penn who has never been kissed, never danced and never ridden on the back of a magical flying horse. All of this changes though when she meets Colin Farrell’s thief Peter Lake.

You can tell watching New York Winter’s Tale that everyone involved poured their heart into it, sure in their belief that they were creating something really special. The film is epic dealing with good and evil, dreams, miracles, mortality, immortality and true love. It should have been beautiful, a Peter Pan/Midsummer Night’s Dream/Narnia/Dracula for our times.

Writer/Director Akiva Goldsman was widowed four years ago and you can see that Mark Helprin’s book, from which this is adapted, must have meant a great deal to him. Its central proposition is whether you can love someone so incredibly much that they just cannot die and whole movie is infused with longing, grief and mourning. Unfortunately it isn’t very good.

This is not the fault of Jessica Brown Findlay, although some of the cast are partially responsible, it is mostly the script. Love is irrepressible and so, it seems, are clichés. On convincing the hero to pursue the girl, someone actually says the line: “So what are you standing around talking to me for?”. Then later when Farrell is reunited with his fantastical steed after ninety years he greets it with the words “Hello my old friend.”. A girl gets swept up off the floor by a man speeding by on horseback (is that really possible), a baby is set adrift at sea and makes it safely to shore, people die and turn into stars. Despite good intentions, it is all very corny.

Also, there in the middle is Russell Crowe as a violent demon called Pearly. I suspect Crowe might have seen this as his Angel Heart but he is funnier than he is menacing despite being close personal friends with Lucifer himself. With this and Noah it seems that Crowe cannot see the true ridiculousness of the parts he is being offered. Wait until you hear who they have miscast as Beelzebub though. It’s Will Smith, the Fresh Prince of Hell Air. Carlton would have been more convincing.

The film quite deliberately sets out to be a New York Fairy Tale and it has all of the simplistic plotting and black and white characters associated with the genre. It’s like Stardust but played totally seriously. No hang on, I can offer you a better analogy that that. With the early 1910s setting and vagabond meets posh girl story, it’s like Titanic only more magical and more cheesy.

Hugh Bonneville in The Monuments Men

Like Colin Firth before him, Hugh Bonneville had already appeared in movies before his star making turn on TV. His most notable films were Iris and Notting Hill and they were both better parts than the one he has here.

The Monuments Men centres around a platoon of WWII soldiers on a mission to save art stolen by the German army. These aren’t just your average GIs though, some of these men; Matt Damon, George Clooney, Bill Murray and John Goodman have come from some of the greatest teams the silver screen has ever given us. That’s two of Ocean’s 11, a Ghostbuster and half of Mike and Sully, throw in The Artist Jean Dujardin and our Earl of Grantham and that’s a great line up.

As it is, despite that cast, the whole thing is a little limp. It doesn’t have any of the tension or action that a war film needs and there are no great stand out scenes. This is most evident in the moment when Damon steps on a land mine and is stuck there unable to lift his foot. This should have the audience holding their breath but the pacing is all wrong and there is somehow no real sense of peril even though someone’s just tripped a large explosive device.

Another problem is that it isn’t immediately easy to get behind their cause. I truly appreciate the value of the masterpieces they are chasing down and I get what the film says about the importance of a culture surviving through such artefacts but there are people here literally dying for their art. Human life is way more precious though and in a conflict that killed at least seventy five million people it is hard to prioritise the paintings.

There are also two bits that are so referential of other films that it proves distracting. I swear Clooney and Damon are deliberately replaying their bar scene from Ocean’s 11 and you just can’t put Murray back in a dentist’s chair and expect me to take it seriously.

Bonneville himself has landed the part that all too often goes to the woman in these boys own adventures. It is him getting into peril that motivates the men around him and this seems to be his greatest purpose in the plot.

(This is known as the ‘Woman in the Refrigerator’ trope after an issue of the Green Lantern comic book in which the hero comes home to find his girlfriend murdered and stuffed in said household appliance.)

Apparently though as a result of Bonneville and Clooney becoming good friends on set, the latter will now be appearing in the next Downton Abbey Christmas Day Special, so there’s that. How is Doctor Who going to compete? They might have to bring Kylie back. Oh, Lady Mary Crawley. You are a complex character; stubborn yet open minded, superior yet considerate of others, flighty yet loyal, guarded yet forthright. To love Downton Abbey is to find a way of loving you.

It has to be said, the character Michelle Dockery plays in this Liam Neeson action flick is not as rounded. Once again though, any flaws in the film are not down to the Downtons and if co-star Lupita Nyong’o can walk away with an Oscar in the same month as this film was released then it’s not going to do her career any harm either.

Dockery is part of the cabin crew on a flight from New York to London, Neeson is a take no crap Air Marshal on the edge, a murderous terrorist is on board – apparently in it for the money and Julianne Moore appears in the movie too – presumably also in it for the money.

It is all a very long way from the sophistication of Highclere Castle.

Dan Stevens in The Guest

Finally we come to Dan Stevens who seemed to leave Downton Abbey in a hurry. His story had been building for three series and just at the point it came to a head and the character was exactly where everyone wanted him to be, it all came to a crashing end in the Christmas Special. Frankly, that year, it ruined the whole Festive Season for a lot of people.

So what was the rush Dan? What did you need to be doing that was so important? The answer is clearly movies, Dan wanted to be doing movies and now, after Summer in February and The Fifth Estate, he has turned up in cinemas in The Guest. This guy is on that path.

I think it is fair to say that The Guest is a total departure from the well-to-do Brit parts he is best known for. Stevens plays David, an American soldier who has returned from the war to visit the family of a fallen comrade. Wouldn’t you know though, there is more to this polite and considerate man than meets the eye. I can’t really say much more than that because there is also a lot more to the film than meets the eye and to talk about it would totally ruin it for anyone who wishes to see it.

I am pleased to say though, after my less than glowing reviews of the films of Stevens’ cast mates, that you should see it. The Guest is a good film.

It isn’t going to be everyone’s cup of tea, it is a 15 for scenes of drug use, nudity and violence, but it is actually a very clever movie. It starts out like a retread of Cape Fear or that Michael Keaton film Pacific Heights but as the film progresses it slowly, almost imperceptibly, transforms from one thing into something entirely different. By the end the tone has changed completely. It is deftly and enjoyably done with the movie demonstrating a full understanding of cinema and the film conventions it is playing with. A few of the online viewer reviews seem to have missed what the director and writer have done here, subtle as it is, but for me this is one of the sharpest and most carefully crafted films of the year so far.

Dan Stevens is really good giving a performance that you would not automatically expect of him. While the jury is out on his previous colleagues, even Hugh Bonneville, I have absolutely no doubt that this guy is at the start of a great career. 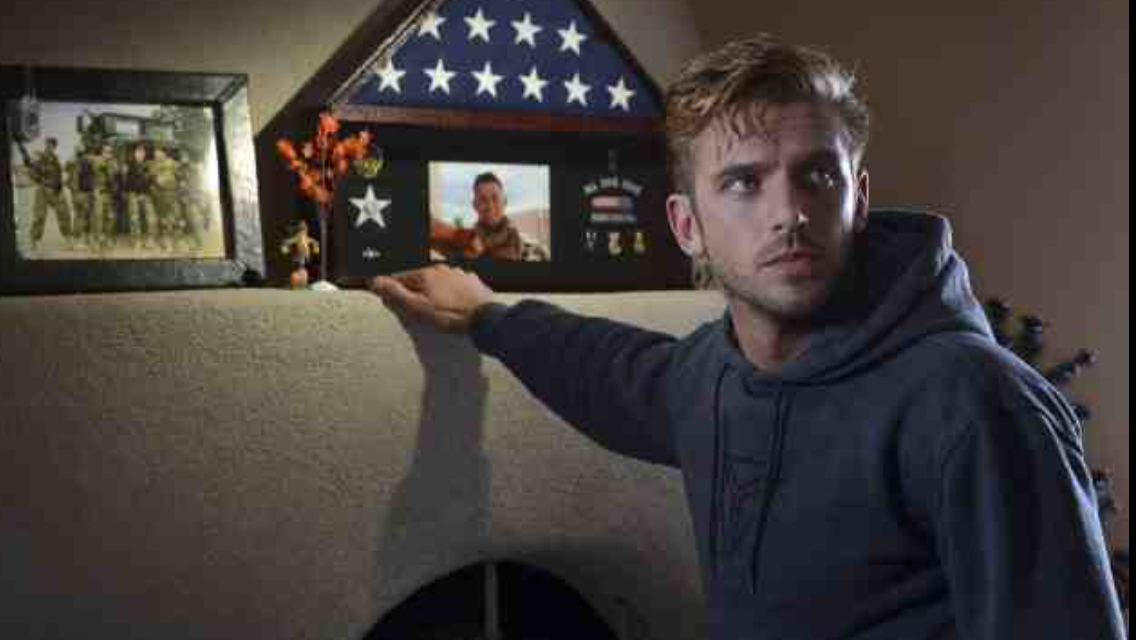