This one wasn’t my choice, I tried to convince my kids to see the new Muppet film instead but they were having none of. Personally it is the most bored I have been in the cinema for a long time and the bits that did manage to keep my attention were just annoying. Still, I’m not the target audience so here are my four year old daughter Tilly’s thoughts on the film:

That was nice. A bit scary, I don’t like the bit where he puts out his claws, but I love it. Can we get the DVD of it?

He tried to get him back but the little frog got him first. My favourite bit is when both of them cuddled.

Can we talk about Ice Age now? 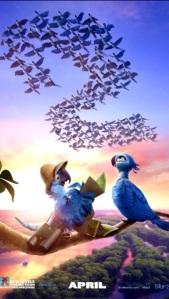