The Secret Life of Walter Mitty

This film was actually released on Boxing Day, but I haven’t had a chance to see it yet. I loved both James Thurber’s short story and the Danny Kaye film, more for the idea than the execution. I find the concept of a man living in his fantasies and the freedom this affords to be appealing, tragic and oddly romantic.

Director David O’Russell has made some really interesting films including Silver Linings Playbook and The Fighter. Here he brings together the actors from those two films to head up a really impressive cast of Jennifer Lawrence, Christian Bale, Bradley Cooper, Amy Adams and Jeremy Renner. Don’t forget that Bale and Lawrence also both won Oscars for their respective O’Russell pics so this will be one to watch out for come awards season. Besides, a good con man flick is always fun and the wardrobe department seem to be having a great time with the 70s setting.

Tragically this film is coming along at a very topical time and there are no two ways about it, that won’t harm the box office. I hope they do the man justice but I also hope it is an honest telling of the story. Idris Elba has done some great acting work on TV but his casting in blockbuster movies hasn’t yet allowed him to show what he can do on the big screen. That is sure to change with this film.

This film re-teams actor Michael Fassbender and director/artist Steve McQueen who did such great work together in Shame. It also has Brad Pitt who is really good with the right material. Even more tantalising though is that this is the second film for both Dwight Henry and Quvenzhané Wallis who gave such raw and compelling performances in Beasts of the Southern Wild.

The Wolf of Wall Street

I didn’t use to like Martin Scorsese films, I’m not keen on Taxi Driver and I hated The Age of Innocence and Cape Fear, but since he has started working with Leonardo DiCaprio his films have been superb. Let’s see what the two of them can do here. The trailer also promises an interesting performance from Matthew McConaughey who is carving out a great career as a character actor despite his good looks.

This one doesn’t stand out on paper but the trailer looks great. It clearly has an excellent cast working at the top of their game, including Meryl Streep, Julia Roberts, Chris Cooper, Juliette Lewis, Ewan McGregor, Benedict Cumberbatch and Abigail Breslin. The film, about a dysfunctional family coming together following a crisis, is directed by John Wells who gave us some of the best episodes in the final season of The West Wing, including those surrounding the departure of Leo.

The Coen Brothers latest film looks like an amusing character piece about a struggling musician in 1960s New York. Here’s hoping it takes the best elements of O’ Brother Where Art Thou, Barton Fink and The Big Lebowski without suffering from the common Coen problem of a weak ending.

The story of Charles Dickens and his mystery lover, which I actually saw last month at the London Film Festival. It is a seemingly honest and moving look at repressed love, celebrity and social conventions in Victorian England that, for me, also raises questions about how much we need to know about our heroes.

It could be fun right? It will be the first film to put Batman, Superman and Wonder Woman together on screen and I have higher hopes for this film than I do the Zack Snyder one coming out in 2015.

Tilda Swinton and Tom Hiddleston as Vampires in a film directed by Jim Jarmusch? You’ve got my attention.

A group of teenagers find the plans for building a time machine. It looks like a retread of a well worn genre being wheeled out for a young demographic. Then again so did Chronicle and that did something really original with the idea of Superheroes. This one really could go either way.

Wes Anderson has always made deliciously quirky films but his style seemed to settle properly with the making of Fantastic Mr Fox. In that movie he took everything he knew about live action film making and applied it to animation. Moonrise Kingdom, the film that followed then felt like he was taking everything he knew about animation and applying it to live action. This film looks similar in tone and should be fun.

When Scarlett Johansson properly arrived on our screens she was a really talented new presence. (I’m only going back as far as Lost in Translation and Girl with a Pearl Earring here. I’ve not even see Home Alone 3.) Somewhere around 2005 though she stated playing the beautiful woman roles and I don’t think she has really managed to step away from that. Under the Skin could be the film to change this and show her as the good actor she is. The synopsis makes it look like a remake of Species but the trailer makes it look like something else altogether.

If you read this blog you will know I am a fan of the Marvel movies and Captain America is one of my favourite characters (along with Iron Man, Thor, Hulk, Black Widow, Hawk Eye, Nick Fury, Maria Hill and Agent Coulson). The first phase of films in the shared universe worked out well and so, with Iron Man 3 and Thor The Dark World, far phase two is looking even better.

Yes, I think we need a new biblical epic and yes I think Darren Aronofsky is the man to give it to us. I wonder if they’ll include that bit from Genesis 9: 20- 27 where Noah gets drunk and passes out, butt naked in his tent.

Normally I wouldn’t be greatly anticipating a big monster movie but the director of this film, Gareth Edwards, has previous having made Monsters. If he approaches this with the same sensibilities, concentrating on the people rather than the Kaiju then it could be great, especially when those people include Bryan Cranston, Elizabeth Olsen, Juliette Binoche, David Strathairn and Sally Hawkins. No sign of Godzuki though.

X Men: Days of Future Past

There have been a number of movie reboots recently; Batman, Spider-Man, Super Man, James Bond and Star Trek. The last one of these cleverly went back to the start while keeping what had come previously as part of the story but it is with the X-men that they have really managed to bring separate film series together. This movie unites the casts of the original X-men trilogy, the reboot and the spin offs making it a direct sequel to three films; X-men: First Class, X-men: The Last Stand and The Wolverine.

Disney Studios are in the strongest position they have ever been in. They have the Marvel films and Star Wars on the roster and after fourteen other princess films they have just topped them all with Frozen. They are also mining their own back catalogue with the production of things like Saving Mr Banks and through a run of live action versions of their classic cartoons. Kenneth Branagh is making Cinderella which, I understand from someone I know who was an extra on it, has big battle scenes in it, but first out of the castle gate is this one. It seems to be Sleeping Beauty from the bad fairy’s POV. It could be interesting.

How to Train Your Dragon 2

I really enjoyed the first one. It marked a real step up for Dreamworks animation who finally showed that they could tell stories as well as jokes.

Dawn of the Planet of the Apes

There have clearly been a great many reboots, remakes and prequels over the last few years yet the idea of revisiting Charlton Heston’s chimpanzee planet was not one that looked wise, especially since we’d been there already with Tim Burton. Then we got Rise of the Planets of the Apes which was a really good blockbuster. I just hope these simian sequels don’t diminish in quality like the ones we got in the 1970s.

Guardians of the Galaxy

The Marvel Cinematic Universe has shown great expertise in taking film series within quite different tones and seamlessly bringing them together. Super soldiers now rub shoulders quite comfortably with big green men and alien gods. They have set themselves an interesting challenge here though as this one has a talking Racoon in it. I wonder what Tony Stark will make of that. 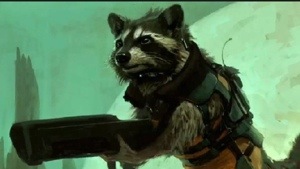 I’ve read the book now and it owes a real debt to George Orwell. I don’t think it needs to be split into two films but if they get it right it could be really good. In fact I think all the angst is going to work better on Jennifer Lawrence’s face than it does on the page. Its also going to be an interesting (couple of) film(s) for Josh Hutcherson.

The Hobbit: There and Back Again

I want to see where that dragon is going.