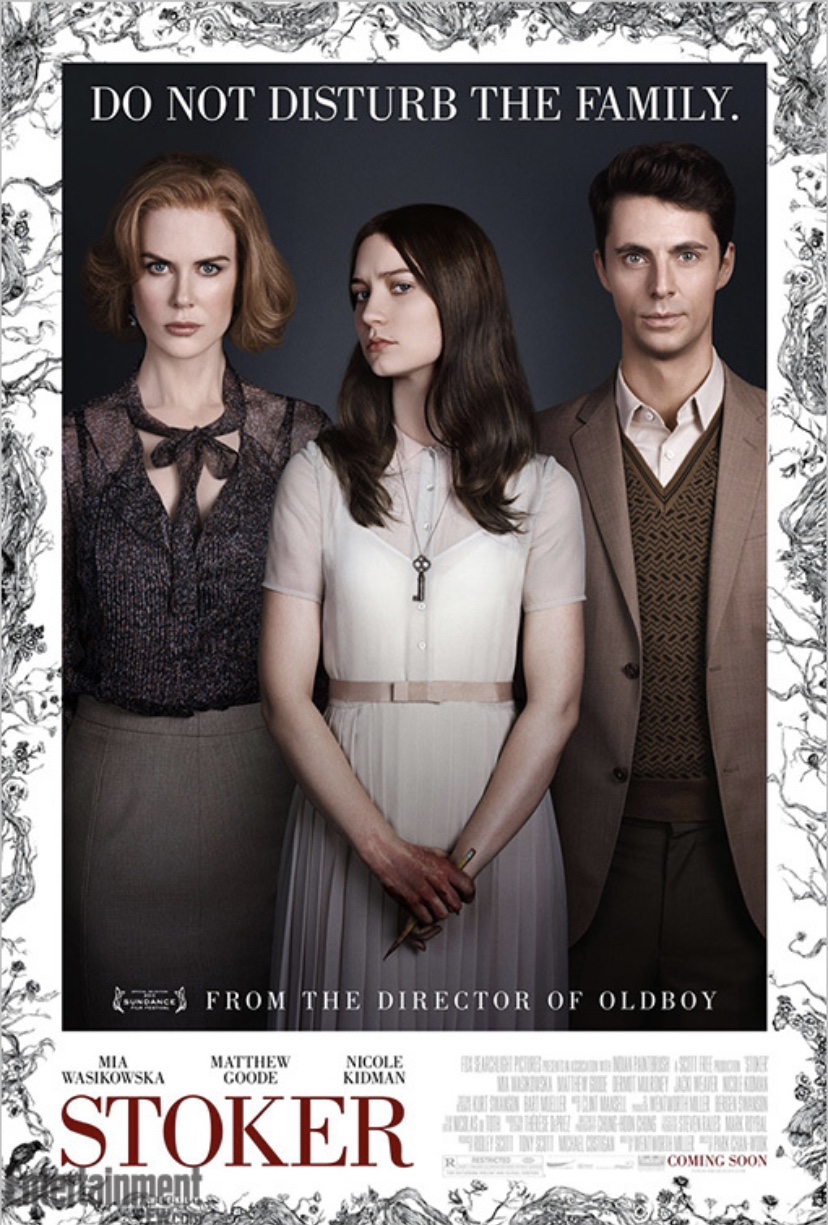 My last trip to the cinema before this was for A Good Day to Die Hard so this time I really felt the need for for something good, a film that properly uses the cinematic tool box to create something surprising and accomplished, celebrating both fine performance and storytelling. I suspected Hansel and Gretel: Witch Hunters may not give me all of this so off I went to see Korean director Park Chan-Wook’s Stoker.

I’ve not seen any of Chan-Wook’s previous work which I worry might be like seeing Mission Impossible 2 and then thinking I can speak with authority about the films of John Woo but with that proviso here I go:

In some respects what you get with Stoker is a fairly derivative slasher film but don’t stop reading because there is so much more to say. The central idea of the creepy relative with a dark past returning to the family home is very reminiscent of John Carpenter’s 1978 classic Halloween. Clearly this story line or some variation of it has been done repeatedly across the last three and a half decades and it is hard to bring something new to the genre. I wanted something good that uses the cinematic tool box to create something surprising etc etc and actually despite the unoriginal nature of the story that is exactly what I got. In someone else’s hands this script could have led to something completely generic and forgettable but Chan-Wook actually raises it to nothing short of high art. What we get with Stoker is a new iconic vision of evil to rival Norman Bates and Michael Myers (the killer from Halloween not Austin Powers) but viewers are also rewarded with a what is truly beautiful slasher flick.

There is one particular shot of a brush running through hair melting into an image of a grassy field that is a piece of audacious and beautiful film making. Spielberg tried something similar in War Horse with a dissolve from a ploughed field to some knitting but this was clumsy and a little cheesy. Here the blend is imaginative and truly artistic in a way that only film can be and when a director can show Steven Spielberg how it is done he deserves your attention.

This hair to field moment is just one example of the way Stoker celebrates cinema as an art form. This film should instantly go onto the syllabus of every film studies course in the world because if mise en scéne is your thing then look no further. Call off the dogs because the hunt for a contemporary film that fills each frame as carefully as The Cabinet of Dr Caligari is over. Hitchcock was a master at this sort of thing and directors have been trying to emulate his style for years. Finally in Park Chan-Wook we might just have his equal.

As well as masterful direction (and a superb soundtrack by Clint Mansell) we get three excellent performances to drive the film along. We’ve seen Nicole Kidman as the tortured widow before (in The Others and Birth) and she still does it well. Matthew Goode is similarly very effective as the creepy uncle, so well manicured that he almost looks like he is made of plastic. The outstanding performance though is from Mia Wasikowska as the ambivalent, ambiguous and troubled daughter. Each of them is perfect in the role which is interesting because originally there was to be a totally different cast. I don’t think that the original players Jodie Foster, Colin Firth and Carey Mulligan, amazingly talented as they are, could have done a better job though. Of course the casting of Mia Wasikowska does mean that I’ll never be able to look at Tim Burton’s Alice in Wonderland quite the same way again, particularly after that shower scene.

Clearly Stoker will not suit everyone’s tastes but if you can handle subtle horror films that build the suspense rather than going for quick scares then this film is an exciting and rewarding cinema experience that will stay with you for a very long time. It is simply brilliant and I loved it.

Stoker is an 18 and while it isn’t gory or too violent, it is menacing and disturbing. In a good way.

One thought on “Stoker”